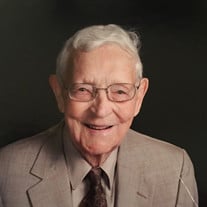 William E. “Bill” McCoy, 97 of Siloam Springs, Arkansas, died January 15, 2020, at his home under the care of Circle of Life Hospice. He was born May 30, 1922, in Douglas, Arizona, the youngest of six children, of Charles McCoy and Winnie Wilson. His family moved to Oakley, Kansas where his father owned a Ford agency. Bill enjoyed working for his dad at the dealership throughout his school years. On December 11, 1941 just after the bombing of Pearl Harbor, Bill enlisted in the Army Air Corps where he served for four years. After his discharge he married Marie Klaus on October 20, 1946. Bill and Marie raised son, Andy and daughter, Martha in Monterey Bay, California where he worked for a large plumbing company. He started a plumbing contracting business, McCoy Plumbing, in California in 1966 and later in Texas, owned a solar heating company; they retired to Siloam Springs in 1990 to be near family. Bill was a member of the First Presbyterian Church of Siloam Springs. Bill was preceded in death by his son, Andy. He is survived by his wife of 73 years Marie; daughter, Martha Reimer and husband Jerry; three grandchildren, Caleb and wife Jenna, Luke and Abby Reimer; two great grandchildren, Zoe and Wesley Reimer; brother, James McCoy of Sacramento, California Funeral services will be 11:00 a.m., Saturday, January 18, 2020 at Wasson Funeral Home Memorial Chapel in Siloam Springs, Arkansas with Rev. Breck Castleman officiating. Burial will follow at Oak Hill Cemetery Siloam Springs, Arkansas. In lieu of flowers memorial gifts may be made to Siloam Springs Senior Center, 750 Heritage Ct, Siloam Springs, AR 72761.

The family of William E. "Bill" McCoy created this Life Tributes page to make it easy to share your memories.

Send flowers to the McCoy family.