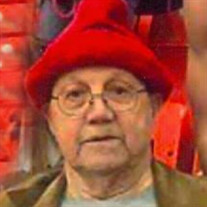 William Jack Stonecipher, 81-year-old resident of Kansas, Oklahoma, died on May 26, 2021, at his home. He was born on June 21, 1939, in Crawford, Arkansas, to G.G. Stonecipher and Glena Waltman Stonecipher. Jack graduated from Omaha High School... View Obituary & Service Information

The family of William Jack Stonecipher created this Life Tributes page to make it easy to share your memories.

Send flowers to the Stonecipher family.