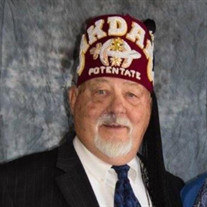 William “Bill” Wraymond Crites, 75 year old resident of Colcord, Oklahoma, died March 30, 2020 at his home. Bill was born on June 11, 1944 in Concordia, Kansas, to Charles Robert Crites and Jolene Nelson Drury. He graduated from high school in Smith Center, Kansas. Bill went to work in heavy construction, owning and operating heavy equipment and working in Kansas, California, Nigeria, Algeria, Arkansas, and Oklahoma. Bill moved to Colcord in 1974 and worked as a coal handler for SWEPCO in Gentry, Arkansas until his retirement in 1999. He continued operating heavy equipment after his retirement and had only stopped recently. He married Sharon Silcox on June 13, 1991 in Las Vegas, Nevada. Bill was a member of Masonic Lodge #252 in Kansas, Oklahoma, where he was past Master three times, and also a 32nd degree Scottish Rite. He also was a Shriner and was Potentate in 2017 at Akdar Shrine in Tulsa, Oklahoma. Bill was an avid hunter that loved to hunt deer, pheasant, and elk. He was a member of Cornerstone Baptist Church in Cherokee City, Arkansas. He was preceded in death by his daughter, Annette Crites; his parents, Charles Crites and Jolene Drury; and two brothers, Lonnie Drury and Randy Drury. He is survived by his wife, Sharon Crites; two sons, Dane Crites of Colcord, Oklahoma and Troy Crites of Colcord; stepson, Greg Silcox of Edmond, Oklahoma; twelve grandchildren, ten great grandchildren with one on the way; and three sisters, Jan Powell of Belton, Texas, Sandy Boardman of Fort Worth, Texas, and Judy Hatfield of Idaho. A private service will be held at Row Cemetery in Colcord, Oklahoma. He will be in state at Wasson Funeral Home on Friday, April 3, 2020 from 8:00 a.m. to 5:00 p.m., with gatherings of no more than 10 people allowed in at any time. The family will be receiving friends at their home on Friday, April 3, 2020 from 5:00 p.m. to 7:00 p.m. In lieu of flowers, donations may be made to Akdar Shrine, 2808 S Sheridan Rd, Tulsa, OK 74129.

The family of William "Bill" Wraymond Crites created this Life Tributes page to make it easy to share your memories.

Send flowers to the Crites family.