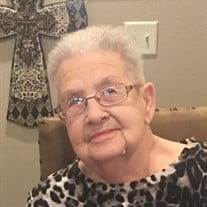 Wanda Elizabeth Robinson, age 89, died in Fayetteville, Arkansas on February 4, 2022. She was born in Tulsa, Oklahoma on December 19, 1932, to Robert and Golda (Langley) Anderson. They moved to Siloam Springs in 1941. She was a graduate of the... View Obituary & Service Information

The family of Wanda Elizabeth Robinson created this Life Tributes page to make it easy to share your memories.

Send flowers to the Robinson family.