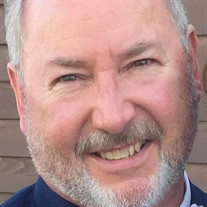 Timothy “Tim” Provost, 61, of Siloam Springs, Arkansas, died February 8, 2020 at Siloam Springs Regional Medical Center. He was born December 3, 1958 in Portland, Oregon to Harvey G. and AQ (Tosh) Provost. Tim married Kimmie Alexander on May 28, 1988. He worked for McKee foods and was a member of Sager Creek Community Church, Siloam Springs, Arkansas. Tim was preceded in death by his father. Survivors include his wife Kimmie of the home; sons Ethan Provost and wife Paige of Siloam Springs, Arkansas and Mason Provost and wife Mary Kate of Rogers, Arkansas; his mother AQ Provost of Siloam Springs, Arkansas; sisters Cathy Jones and husband K.C. of Summers, Arkansas, Shirley Dilbeck and husband Loren of Siloam Springs, Arkansas, Diana Haxel and husband Ken of Fayetteville, Arkansas and Ronda Blevins of Van Buren, Arkansas; three grandchildren Cameron Evans, Abbott Provost and one on the way in June Elliott Rhen Provost; and a host of other family members, Tim had an unconditional love for his family, friends and sports. He was an avid fan of the Arkansas Razorbacks and the Chicago Cubs. He religiously watched College Game Day on Saturdays in the Fall with his wife and boys. Tim enjoyed traveling to his grandson Cam’s baseball games all across the state. He was so proud of his grandkids often found in the back yard throwing a ball to Cam or chasing Abbott around the yard on their John Deere “Tractors”. Tim enjoyed journaling and writing notes to his family for a “daily read” to start their day each morning. He would spend many hours journaling about his day, his family, and his friends. He incorporated his writing in many of his gifts to family & friends in the form of poems and fun scavenger hunts. Tim’s love and passion for those close to him was unmatched and will be dearly missed. A memorial service will be 10:00 a.m., Thursday, February 13, 2020 at Sager Creek Community Church, Siloam Springs, Arkansas. In lieu of flowers or plants, please make a contribution to the Welles Remy Crowther Charitable Trust, 106 Birchwood Ave., Upper Nyack, NY 10960 or the Arkansas Children’s Hospital, 260 Gene George Blvd., Springdale, AR 72762.

The family of Timothy "Tim" Scott Provost created this Life Tributes page to make it easy to share your memories.

Send flowers to the Provost family.