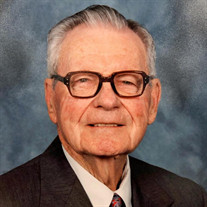 Thomas Lee Jones, 100 year old resident of Rogers, Arkansas, died on March 12, 2020 at Circle of Life Hospice in Springdale, Arkansas. He was born on January 4, 1920 in Goldthwaite, Texas, to Walter Lee Jones and Nannie Ligon Jones. Tom married Laureene Feemster on June 3, 1945 in Pratt, Kansas. He was a veteran of World War II, serving in the Pacific Theater. Tom retired for the United State Air Force Reserve with the rank of Lieutenant Colonel. He graduated from Texas A&M University with a Bachelor’s of Science Degree in Agricultural Education. They moved to Siloam Springs, Arkansas in 1950 and he worked as a field man for Pet Milk Company for many years. Tom was a member of First United Methodist Church in Historic Downtown Rogers for the last 20 years. He was preceded in death by his wife, Laureene; brother, John Jones; and sister, Roxie McKinnis. He is survived by a son, Lee Jones and wife Monica, formerly of Siloam Springs; daughter, Carol Spurlock and husband Davis of Rolla, Missouri; four grandchildren; and five great grandchildren. Funeral services will be 2:00 p.m., Saturday, March 14, 2020 at Wasson Funeral Home in Siloam Springs, with Pastor Michael Mattox officiating. Burial will follow at Oak Hill Cemetery in Siloam Springs. Visitation will be from 1:00 p.m. to 2:00 p.m., Saturday, March 14, 2020 at Wasson Funeral Home. In lieu of flowers, memorials may be made to First United Methodist Church in Rogers or to the First United Methodist Church in Siloam Springs.

The family of Thomas Lee Jones created this Life Tributes page to make it easy to share your memories.

Send flowers to the Jones family.