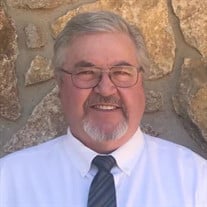 Rudolph “J.R.” Harold Clausing, 66 year old resident of Siloam Springs, Arkansas, died on January 13, 2021 in Springdale, Arkansas. J.R. was born on August 28, 1954 in Independence, Missouri to Rudolph Harold Clausing, Sr. and Mary Sellers Clausing. He graduated from high school and began work as a dental laboratory technician at the age of 17. J.R. married Gloria Steele on June 20, 1976 in Independence, Missouri. They moved to Siloam Springs in 2006 and he continued to work for Halley Dental Laboratory in Fayetteville, Arkansas. J.R. was a member of Christ Lutheran Church in Siloam Springs. He was preceded in death by his parents, Rudolph and Mary Clausing. J.R. is survived by his wife, Gloria; six children: Cameron Clausing and wife Hailey of Centerton, Arkansas, Caleb Clausing and wife Alma of Phoenix, Arizona, Colter Clausing and wife Holly of Lee’s Summit, Missouri, Chase Clausing of Siloam Springs, Anna Clausing and husband Jesse Harp of Siloam Springs, and Abrielle Clausing of Siloam Springs; grandchildren: Jacob, Landon, Lacey, Alexa, Beau and Lincoln; brother, Rick Clausing; sister, Gina Dawe and husband Travis; and niece, Justice. Funeral services will be 2:00 p.m., Saturday, January 23, 2021 at Wasson Funeral Home in Siloam Springs, with Rev. David Hudak officiating. Visitation will be from 6:00 p.m. to 8:00 p.m., Friday, January 22, 2021 at Wasson Funeral Home in Siloam Springs. For the visitation and funeral service, everyone will be required to wear their own facemask, per the guidelines set forth by the State of Arkansas. A gofundme page has been set up in memory of Rudolph (J.R.) Clausing at https://www.gofundme.com/f/in-memory-of-rudolph-jr-clausing?utm_source=customer&utm_medium=copy_link&utm_campaign=p_cf+share-flow-1

The family of Rudolph "J.R." Harold Clausing created this Life Tributes page to make it easy to share your memories.

Send flowers to the Clausing family.