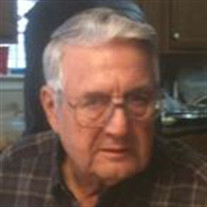 Roy Lee Jech, 89, passed away Saturday, January 29th, at his home in Gentry, Arkansas. Roy was born on September 11, 1932, to Charlie and Agnes (Miller) Jech, in Piedmont, Oklahoma. Growing up he learned his strong work ethic working with his brother in the family sawmill, where they built chicken coops for the area chicken companies. He graduated from Gentry High School in 1950, then attended UALR junior college where he played basketball. He was in the US Army from 1952 to 1955, where he played baseball and served as a tank commander at Ft Carson Co. Roy began his career with the US Postal service in 1955 and retired as postmaster in 1985. After retiring, he enjoyed time at “the farm” where the family raise cattle, building and fixing things in his workshop, and keeping his yard and home looking good. Roy also volunteered in his community and church. He spent many months working on the start of what is now the Gentry City Park. He also oversaw and worked personally on building the current First Assembly of God church in Gentry. He served for many years on the city council, planning commission, and was active in the Lions Club. Roy was loved and respected by his family and friends. He was a devoted husband, father, and grandfather. He was known for his integrity, faith, kindness, and generosity. Roy is described by one grandson as, “the strongest, fairest person I know”. He enjoyed family gathering so much, especially the 4th of July. Roy is survived by his wife of 69 years, Georgena; son Ron Jech and Mary (Sullivan) Jech; son, Charles Jech and Jerah (Clifford) Jech; daughter, Karen Holland (Jech); grandchildren, Nate Holland, Allison Holland, Jeremiah Jech, Caleb Jech, Levi Jech, Jessica Knight (Jech), Kody Jech, Kelcey Finn, Bret, Halee, and Uriel Jackson; and numerous great grandchildren, nieces and nephews. Visitation will be held on Sunday, February 6, 2022, at Wasson Funeral Home, at 12:00 P.M. Funeral service will be held following the visitation at 2:00 P.M. at Wasson Funeral Home chapel. Burial to follow at Gentry Cemetery.

Roy Lee Jech, 89, passed away Saturday, January 29th, at his home in Gentry, Arkansas. Roy was born on September 11, 1932, to Charlie and Agnes (Miller) Jech, in Piedmont, Oklahoma. Growing up he learned his strong work ethic working with his... View Obituary & Service Information

The family of Roy Lee Jech created this Life Tributes page to make it easy to share your memories.

Send flowers to the Jech family.