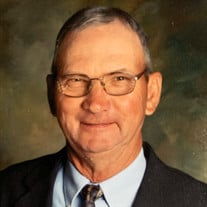 Ronald W. “Ronnie” McGhee, age 72, died on Tuesday, October 12, 2021, in Decatur, Arkansas. He was born in Little Rock, AR on February 9, 1949 to George W. and Marguerite (Gaydon) McGhee-Reed. Ronnie grew up in Siloam Springs, AR, graduating from Siloam Springs High School in 1967. He attended Arkansas Tech, Russellville, AR for two years and completed his education with a BS Animal Science from the University of Arkansas- Fayetteville in 1971. He and Paula were married the week after he graduated and they celebrated their 50th wedding anniversary this past June. He was first employed as the manager of the U of A Swine Research Center in Savoy, AR before moving to Decatur, AR in early 1974 to work with and eventually manage Greenlawn Farm, Inc. (poultry, then a cow/calf operation) for the next 48 years. Ronnie served on and was the past chairman of the Benton County Soil Conservation Board for many years, Arvest Bank-Gravette, AR- Board of Directors, Decatur City Council and was a long time member of the Decatur United Methodist Church serving in many roles but particularly the finance committee for many years. Ronnie was always known for his sense of humor, hard work, character and good common sense. He was particularly proud of the family being awarded the Arkansas Farm Family of the Year-1994 and the same year being named the Arkansas Beef Cattle Producer of the Year. He was always ready to drive anyone that wanted around the hills of Greenlawn to see good mama cows, uniform steers, baby calves or a new crop of hay. He loved kids and many drove their first truck or had their first horse ride around those pastures. He is survived by his wife, Paula (Browning) McGhee; sons, Matt McGhee of Decatur, AR, Adam and wife Jill McGhee of Gentry, AR; sister, Kay and husband Darryl Steele of Conway, AR; brother Rusty and wife Fran McGhee of Tulsa, OK; grandchildren, Seth, Addy, Jackson of Gentry, AR; sisters in law, Ann Davis of Edmond, OK and Kim Browning of Decatur, AR; and many nieces, nephews, cousins and friends. Memorial services will be Sunday, October 17, 2021 at the Decatur United Methodist Church of Decatur, Arkansas with visitation from 2pm to 3pm and funeral services thereafter with Pastor Heath Williams officiating. In lieu of flowers, donations may be made to Falling Springs Cemetery, P. O. Box 365 Decatur, AR 72722 or Decatur United Methodist Missions P. O. Box 709 Decatur, AR 72722 To sign the online guestbook, please visit www.wassonfuneralhome.com .

The family of Ronald Wayne "Ronnie" McGhee created this Life Tributes page to make it easy to share your memories.

Send flowers to the McGhee family.