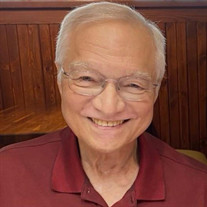 Ronald Allen Johnston went home to be with the Lord on January 18, 2022 in Siloam Springs, AR. He was born on March 3, 1944 in Santa Monica, CA to Allen and Faith Johnston. He had fond memories of his childhood in California. Shortly after graduating high school, he joined the Navy and was stationed in Naples, Italy for a two year assignment. During this time, he met the love of his life, Esther Anne Wilder. They were married on March 1, 1969. Three months later Ron and Esther moved to Longview, TX for Ron to attend LeTourneau College where he received a Bachelor of Science in Electrical Engineering. After graduating from college, he began working for Marathon LeTourneau Company where he worked for 37 years until retirement. Ron and Esther raised three daughters, Ruth, Laura and Amy in the Longview area. They were actively involved in their church, Hope Fellowship, where Ron lead worship, taught Sunday School and was an elder. Their time at Hope Fellowship provided many life long friendships. After retirement, Ron and Esther moved to Siloam Springs, AR to be close to family. They enjoyed developing new friendships in their church home at Sager Creek. Ron could often be found working in his garage. He loved to be outdoors and to work with his hands. He could fix most anything and always enjoyed doing projects for his family. Nothing brought him more joy than cheering on his Arkansas grandsons at countless basketball games, watching his granddaughter in dance recitals, and visiting two of his grandsons in Georgia. He was blessed with three son-in-laws, six grandsons and one granddaughter. He often spoke of what joy it brought him to know all of his girls, their husbands, and his grandchildren love and follow the Lord. The day Ron finished his race here on earth he was able to talk with or see all of the son-in-laws and grandchildren and tell them how much he loved them. He was able to listen to the goodbyes from his sister and sister-in-law. He was surrounded by his daughters and wife, Esther, as his eyes closed from his earthly vessel and were opened to see the Savior he loved and served and to begin living his best life yet. Ron is proceeded in death by his parents, Allen and Faith Johnston and his sister Ruth Blue. He is survived by his wife of 53 years, Esther; daughters, Ruth Smith and husband Paul of Loganville, GA, Laura Vachon and husband Scott of Siloam Springs, AR and Amy Wessels and husband Heath of Springdale, AR; sisters, Mary Helen Crawford and Sherry Carpenter and husband Ken; 7 grandchildren, Joshua, Jared, Drew, Nathan, Ryan, Elliott, and Grace and a host of much-loved extended family. Services will be held at Sager Creek Community Church at 11:00 a.m. on January 22, 2022. In lieu of flowers, memorial donations can be made to Ezekiel Rain at www.ezekielrain.com (checks can be sent to P.O Box 6748, Siloam Springs, AR 72761) or to Sager Creek Community Church designated to the mission fund. Service is available on this link: https://boxcast.tv/view/ron-johnston--memorial-service-eari64w8cpeiwo9jcl2c

Ronald Allen Johnston went home to be with the Lord on January 18, 2022 in Siloam Springs, AR. He was born on March 3, 1944 in Santa Monica, CA to Allen and Faith Johnston. He had fond memories of his childhood in California. Shortly after... View Obituary & Service Information

The family of Ronald Allen Johnston created this Life Tributes page to make it easy to share your memories.

Ronald Allen Johnston went home to be with the Lord on January...

Send flowers to the Johnston family.