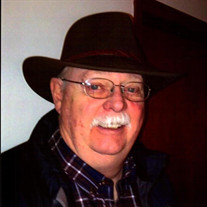 Roger Clark was born on August 20, 1950, in Bentonville, Arkansas to Betty Jane (Bennett) Holland and Ree Clark Holland. On April 12, 2022, heaven gained another warrior. Roger was loved by so many. He was the smartest man in the room, advised many, and wise beyond his years. A jack of all trades and a master at anything he tackled. He had “Rogerisms” such as witty sayings “You need a pair and a spare!” or maybe you were the recipient of one of Roger’s texts that always ended with an American Flag, Bald Eagle and a Bald Emoji Man smiling. Roger was married to Tami Lea (Turley) in September of 2008; Who he referenced as the love of his life. He is also survived by his 2 children: Sons – Ryan Clark and Sara Marie Holland and Eric Lee and Amy Rebecca Holland. Spoiled rotten Grandchildren Kassidy Lee Carter and Benjamin Carter, Kaylee Rebecca Holland, Avery Ryann Chargualaf and Nick Chargualaf, Carson Robert Price, Cassidy Elizabeth Price, Eric Lee (Little E) Holland and Brynlee Faith Holland. Great Grand Spoiled Children Roane Clark Carter and Matty Josiah Carter. Roger is also survived by many nieces, nephews, and cousins. Roger is proceeded in death by his parents Betty Jane Holland and Ree Clark Holland, two sisters, Carolyn and Phil Bramlett and Aunt Char and Uncle Jerry Harwell. Roger graduated from Henderson State College and served our great country as an Officer in the United States Army. Memorials made to VFW Post 1674 Siloam Springs and mailed to P.O. Box 6847, Siloam Springs, AR 72761 Memorial Service will be 10:30 a.m. on Friday, April 15, 2022, at Fayetteville National Cemetery in Fayetteville, Arkansas. To sign the online guestbook, please visit www.wassonfuneralhome.com

Roger Clark was born on August 20, 1950, in Bentonville, Arkansas to Betty Jane (Bennett) Holland and Ree Clark Holland. On April 12, 2022, heaven gained another warrior. Roger was loved by so many. He was the smartest man in the room,... View Obituary & Service Information

The family of Roger Clark Holland created this Life Tributes page to make it easy to share your memories.

Send flowers to the Holland family.