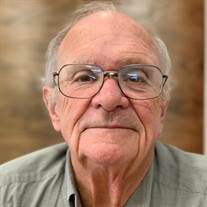 Robert Frank Weir, 72 year old resident of Siloam Springs, Arkansas, died on September 22, 2020 at his home. He was born on October 10, 1947 in Bentonville, Arkansas, to Robert Ralph Weir and Bessie Pearl Harral Weir. Bobby entered the world with a broken arm and two older sisters, Patsy and Deanna. He went to school in Gentry and graduated from Gentry High School in 1964. Soon after he went into the Navy and served 4 years on the USS Enterprise Aircraft Carrier. Working on the flight deck and loading the bombs into the planes. After the service, he returned to Gentry, he met the love of his life, Rhonda Thompson. She wanted to drive his car and after she wrecked his new 442, they knew it was love. Within a couple of months, he proposed and they were married February 7, 1970. Rhonda and Bobby created a life and home in Siloam Springs. They were blessed with two sons, Jeremy Charles in 1976 and Nicholaus 1978. Bobby worked at Waukesha and then Brand-Rex for many years. At the age of 39 he had his first encounter with death. He had a dissecting Aorta and was in and out of life during the major surgery. He turned 40 in the hospital and after 6 long weeks he was home. You couldn’t keep Bobby down. He wanted to make sure his family was provided for by him. Bobby and Rhonda opened the Gentry Automotive soon after Brand-Rex closed. He worked for T and T East and his last job was as the cook for New Life Child Development Center. He was Mr. Bob to many young kids who thought he was the best cook ever. Bobby and his family grew up as members of Gentry First Baptist Church. After he and Rhonda were married, they began teaching in the primary Sunday school department where Bobby continued to teach until his health wouldn’t allow. Bobby was a member of Key Lodge 7 Masonic Lodge in Siloam Springs where he served in several different offices and twice as Worshipful Master. He was a dedicated servant wherever he found a calling. In his last days at home he wouldn’t give in. He learned to drive a bigger tractor, not without some complications. He made sure the cows were watered when he had the strength. Bobby cooked for himself and maintained his independence. When talk turned serious he said he didn’t want to be a burden. His main concern was he couldn’t take care of his boy any longer. He was preceded in death by his parents; his wife, Rhonda; and his son, Nicholaus. Bobby is survived his son, Jeremy Weir; grandchildren, Kiley Weir and Kinley Weir; sisters, Patsy Hogan of Temple, Texas, and Deanna Smith and husband Clifford of Bristow, Oklahoma, and numerous nieces, nephews, and extended family. Funeral services will be 10:00 a.m., Saturday, September 26, 2020 at First Baptist Church in Gentry, Arkansas, with Mark Evans officiating. Burial will follow at Gentry Cemetery. Visitation will be from 6:00 p.m. to 8:00 p.m., Friday, September 25, 2020 at Wasson Funeral Home, in Siloam Springs. For the visitation and funeral service, guests will be limited to 150 people and everyone will be required to wear their own facemask, per the guidelines set forth by the State of Arkansas. In lieu of flowers, the family ask that all donations be made to Key Lodge #7 F.N.A.M., P.O. Box 871, Siloam Springs, AR 72761, for a scholarship fund in his name.

The family of Robert Frank Weir created this Life Tributes page to make it easy to share your memories.