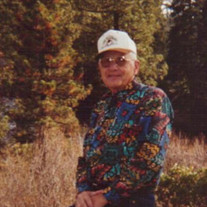 Robert “Bob” D. Meyer, 90, of Gentry, Arkansas, went to be with the Lord on September 18, 2020 at his home. Bob was born February 14, 1930 in Oswego Township, Illinois, to Henry Meyer and Wilhelmina Papke Meyer, both of whom emigrated as small children from Germany through Ellis Island. Bob joined the Navy at the age of 17 and served during the Korean War. After his discharge, he remained in California. He was a fireman with the Los Angeles County Fire Department for 20 years attaining the rank of Captain, before receiving a disability retirement. After retirement, he moved to Gentry, Arkansas. He accepted Jesus Christ as his Savior at age 54 and accepted a new career as witness and servant for his Lord. He married Wanda Shankles Meyer in 1984. They enjoyed working a small cattle operation, which the Lord used as a training ground and a testimony of His faithfulness and protection. Bob was a member of the Gentry Christian Church. Bob was preceded in death by one son, one grandson, his parents, one brother, and four sisters. He is survived by his wife, Wanda, and children, Robert D. Meyer, Jr., Colleen Meyer, Heather Alosi and Joseph Meyer. He is also survived by daughter-in-law, Corrine Meyer, six grandchildren, eleven great grandchildren and two great great grandchildren, and extended family, Ray Turney. In lieu of flowers, donations can be made to The Gentry Mennonite Youth, 19058 Jackson Road, Gentry, AR 72734; the GFA Food Pantry, P.O. Box 1375, Gentry, AR 72734 or the charity of your choice. Funeral services will be 2:00 p.m., Sunday, September 27, 2020 at Gentry Cemetery with Pastor Rick Pearson officiating. “Well done, thou good and faithful servant: thou hast been faithful over a few things, I will make thee ruler over many things: enter thou into the joy of the Lord.” Matthew 25:21

The family of Robert "Bob" D. Meyer created this Life Tributes page to make it easy to share your memories.

Send flowers to the Meyer family.