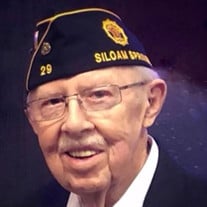 Richard James Mohline died on January 23, 2021 at the age of 90, at the Circle Of Life Hospice in Bentonville. Known as Dick to friends and family, Dick was born in Trenton, New Jersey on July 26, 1930. He met his wife Jane while working on the 1957 Billy Graham crusade, and was married on July 21, 1957; a marriage of 63 years. Dick felt the calling to a life of ministry at the age of 21, pursued schooling at Moody Bible Institute, Wheaton College (B.A.), Gordon Conwell Seminary (Masters of Divinity), and attended Loyola University for a doctorate degree (honorary doctorate degree conferred). Dick joined the United States military in 1953, serving stateside during the Korean War and Viet Nam War, and completing the U.S. Army Chaplain School in 1960. After completing his M.Div, he remained stateside to serve veterans returning from war, working with those who were homeless on the streets of L.A. and in various prisons and hospitals over the years. In 1963, Dick joined the staff of Moody Bible Institute eventually becoming the Dean of Students, in 1970 helped start the Rosemead School of Psychology and Theology, serving as administrator and professor; was on staff with the Trinity Evangelical Divinity School 1976-1978 where is also helped start the North Shore Counseling Center; after retiring continued to work in academia at JBU. Throughout the years, with his wife Jane, they worked with various mission boards and churches, both in the U.S. and overseas. In his later years, he was a part of the American Legion #29, as he wanted to continue serving his community through volunteer work. He served on various boards including: Narramore Christian Foundation and The Center for Healthy Relationships. He was athletic, loved friendly competition and could beat everyone at any game. Dick is known by all who have crossed his path as kind, friendly, always smiling, wise, and always willing to lend a hand or listen. When recently asked what he wanted to be remembered for, he said “I love to make people smile . . . I feel I help share God’s love for them.” Dick is survived by his wife, Jane; 2 daughters, Faith Berry and husband Keith Berry of Siloam Springs, Lynn Matuska and husband Kevin Matuska of Altoona, PA; 2 sons, Richard Mohline and wife Julie Mohline of Surprise, AZ, and James Mohline and wife Deborah Mohline, of Myrtle Beach S.C.; 11 grandchildren, Virginia Vickery, Courtney Moor, Samantha Beeler, Jordan McCunn, Ryan Berry, Haley Seliga, Bee Fuller, Dan Morrow, Tasha Ponse, Joshua Mohline, and Luke Mohline; 9 great grandchildren. He is also survived by his brother Bill Mohline, sister Harriet, and brother John Mohline. Funeral services will be 3:00 p.m., Saturday, January 30, 2021 at Community Christian Fellowship (CCF) in Siloam Springs, Dr. Gary Oliver giving the eulogy. Burial will follow at Oak Hill Cemetery in Siloam Springs. Visitation will be from 1:45-2:45, Saturday, January 30, 2021 at Community Christian Fellowship. For the visitation and funeral services, guests will be limited to 180 people and everyone will be required to wear their own facemask, per the guidelines set forth by the State of Arkansas.

Richard James Mohline died on January 23, 2021 at the age of 90, at the Circle Of Life Hospice in Bentonville. Known as Dick to friends and family, Dick was born in Trenton, New Jersey on July 26, 1930. He met his wife Jane while working on... View Obituary & Service Information

The family of Richard James Mohline created this Life Tributes page to make it easy to share your memories.

Send flowers to the Mohline family.