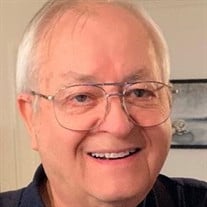 On Friday, January 28, 2022 our beloved father, grandfather, brother, uncle, and friend, Ray Emerson McCurdy of Palmetto, Georgia passed away at the age of 79 years due to complications from COVID-19. Ray will be lovingly remembered and dearly missed by his wife Brenda; daughter Michelle McCurdy Ardisson and her husband Marc, and son Tyson McCurdy; grandchildren Chelsea Ardisson Bailey and her husband Preston, Aaron Ardisson and his fiancée Helen Handelman, Bryce Ardisson, and Triston McCurdy; brother Robert McCurdy and his wife Lynda, as well as numerous relatives, friends, colleagues, and former students. He was preceded in death by his parents Robert Clement McCurdy and Bernice Orra Larsen McCurdy, and his sisters Ramona McCurdy and Marlene McCurdy. Ray was born in a modest farmhouse in Brush, Colorado; later moving to Siloam Springs, Arkansas. Ray was no stranger to epidemics and, at the tender age of 4, was hospitalized for 6 weeks with Polio, having to re-learn basic skills through countless hours of physical therapy. Growing up on a farm, surrounded by his loving and supportive family, contributed greatly to his successful recovery. Stories of life on the farm have always been among the most requested by his grandchildren. Ray developed a curiosity for all things mechanical at a young age, and that quickly grew into a passion for aviation. As a 15-year-old, he would walk from school to the local airfield to take flying lessons. He obtained his pilot's license before getting his driver's license. His formal education included Ozark Academy, Gentry Arkansas; Shenandoah Valley Academy, New Market, Virginia; and a short stint at Southern Missionary College, Collegedale, Tennessee. One of his advisors at Southern wrote of Ray, "He has tremendous interest in outdoor activities, mechanical pursuits, and has some artistic ability. I believe his character is above reproach and that anyone would find him a serious and dedicated young man". His intellectual pursuits did not end at Southern, and he quickly earned every certificate and rating possible in the realm of aviation. He began his career in aviation in 1964 as a mechanic's helper, ground crewman, and ferry pilot. In 1966, after achieving the flight instructor Gold Seal Certificate, Ray became the Chief Flight Instructor for OSAGE Aviation in Tulsa, Oklahoma. He had a long and storied career in aviation that included positions as Chief Pilot for McKee Baking Company, Collegedale, Tennessee, President and owner of Shelbyville Aviation Services, Inc., Shelbyville, Tennessee, and most recently working as Instructor, Program Manager, and Training Center Evaluator at Flight Safety International, Atlanta, Georgia. He amassed over 25,000 hours piloting and instructing in helicopters, single and multiengine piston aircraft, turboprops, and jets during his 65 years as a professional pilot. As a pilot and a flight instructor, he was the best of the best. At age 27, while instructing a student, Ray had to land a twin engine Piper Apache without the nose gear when it failed to lower. Knowing he would need to make an emergency landing, he flew for some time, depleting as much fuel as possible and then feathered and bumped both props to the horizontal position. He landed on the rear wheels, holding the nose of the plane aloft for as long as possible resulting in a safe landing with no damage to either engine, and only very minimal damage to the nose of the plane. Those fortunate to have received instruction from Ray are among the best trained in the world. Ray was an adventurer at heart. He loved going to air shows and camping out under the wing of his airplane, exploring National Parks, taking his family on ski trips to Colorado, and spending summer weekends at the lake water skiing. He planned the most amazing road trips, making sure to incorporate time to stop at places of interest, and driving out of his way to visit relatives and friends in the area. Taking a road trip with Ray was always interesting. About an hour into a 10-hour car ride across the country, he would jokingly remark, "if we were flying, we would almost be there by now", and if you were riding shotgun, you might need to remind him that he shouldn't drive straddling the dotted line on the interstate as if it were a runway. The only passions Ray esteemed higher than aviation and adventure were God, family, and friendships. He was an active member of his church and was a faithful servant. If you knew Ray, you also knew he would give you the shirt off his back, expecting nothing in return. He loved spending time with his children and grandchildren and enjoyed sharing his life experiences through the many stories he told. His family will greatly miss seeing him do a jig around the kitchen, his zeal for life, and his winning smile. A private graveside service will be held at the family's request. Memorial donations may be made to Go Fund Me account for the ongoing costs of memory care for his wife Brenda for whom he was the primary caregiver, or a Tribute donation may be made in his name directly to the Alzheimer's Association in honor of his wife Brenda. The family wishes to send a special thank you to Dr. Mayur Patel and the wonderful team of individuals for their expertise and compassion in caring for Ray during his stay at Piedmont Newnan Hospital.

On Friday, January 28, 2022 our beloved father, grandfather, brother, uncle, and friend, Ray Emerson McCurdy of Palmetto, Georgia passed away at the age of 79 years due to complications from COVID-19. Ray will be lovingly remembered and dearly... View Obituary & Service Information

The family of Ray Emerson McCurdy created this Life Tributes page to make it easy to share your memories.

Send flowers to the McCurdy family.