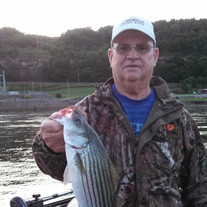 Neddie "Ned" Glen Phillips, age 68, passed away on June 1st, 2020 at his home surrounded by his family. Ned was born on September 18, 1951 in Tulsa, OK to Earl Steve and Frances (Lawrence) Phillips. He lived in Tulsa until age 8, when the family moved to Kansas, OK along the Illinois River. Ned graduated from Kansas High School in 1969, and went on to graduate from Northeastern State University in Tahlequah, OK. Ned was part of Kansas Public School for over 30 years as a teacher, coach, and principal. Ned loved the community and growing up along the river. He had many lifelong friendships with his co-workers and students. On July 28, 1973, Ned married Marie Tyre. They had three children Angela, Lundy, and Brian, who were all very close to him. Ned’s idea of a perfect vacation was fishing and camping on the lake with all of his family members. Ned was a very active member of the Kansas First Baptist Church, and was the Sunday School Director for many years. He always looked forward to being with his “Christian Family”. If a job needed done at the church, Ned was there to help. Ned was also a member of the Illinois River Fire Department until his retirement. After retirement from Kansas Public Schools, Ned volunteered with Oklahoma Baptist Disaster Relief helping many families after damage from severe weather. He never met a stranger, and was happy to visit with people anywhere he went. Ned was proceeded in death by his parents Earl & Frances Phillips, and sister-in-law Betty Phillips. He is survived by his wife Marie, 3 children, Angela Dawn Verbeck and husband Jason of Kansas, OK, Lundy June Morrison and husband Chad of Broken Arrow, OK and Brian Glen Phillips and wife Jackie of Fayetteville, AR. He is also survived by 6 grandchildren, Mercedes, Kenley and Daniel Verbeck, Bailey and Lillian Morrison, and Bryce Phillips. Other close surviving members of the family include his brother Roy Phillips of Tahlequah, OK, brother Tony Phillips and wife Linda from Kansas, OK, nephew Cayce Phillips and family, and honorary children Bobby Reed and Erica Poteet. Along with those listed are many friends he considered family. In lieu of flowers donations may be made to First Baptist Church Kansas, 360 N. Kansas St., Kansas, Oklahoma.

Neddie "Ned" Glen Phillips, age 68, passed away on June 1st, 2020 at his home surrounded by his family. Ned was born on September 18, 1951 in Tulsa, OK to Earl Steve and Frances (Lawrence) Phillips. He lived in Tulsa until age 8, when the... View Obituary & Service Information

The family of Neddie "Ned" Glen Phillips created this Life Tributes page to make it easy to share your memories.