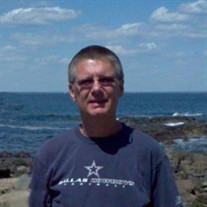 Mitchell L. Jackson passed away October 28, 2020 at age 57 after a courageous battle with cancer. Mitchell was born to Bill and Marilyn Jackson September 20, 1963 in Siloam Springs, AR. Mitchell is preceded in death by his grandparents Walter (Bump) and Nadine Younger and Bob and Barsha Jackson and his aunts Linda Parks and Mary Hagedorn. Mitchell is survived by his parents, his brother Michael, his aunt and uncle James and Beverly Joyce and his cousins. He is also survived by his adopted family: José and Herelia Martinez, Yareli and Brittani Jacz, and their daughters Tatiana, Talia, and Areli. Mitchell grew up in Siloam Springs and graduated from Siloam Springs High School. He attended college at NEO in Miami, OK and graduated from the University of Arkansas at Monticello with a degree in forestry. He worked 25 years for the Arkansas Forestry Commission and retired in 2011. During his retirement he spent time transporting dogs to the Northeast to be adopted. His efforts helped thousands of his animal friends find homes. Those trips also allowed him to visit his brother in New Hampshire. Later he worked for O’Reilly Auto Parts. He lived in Clarksville for 25 years. When he became ill he moved back to Siloam Springs to be near his doctor, Dr. Patrick Travis, and his family. While back home he renewed old friendships and spent time with dear friends Michelle, Lonnie, Amy, John, Kelly, Lyn, Linda and many others. Mitchell will be missed beyond words but will always be a part of everything we do. The memorial service will be held at 2:00 p.m., Saturday, June 19, 2021, at Wasson Memorial Chapel, Siloam Springs, Arkansas. His burial will be private. In lieu of flowers donations could be made to Needy Paws Animal Shelter, 1040 E. Main St. Clarksville, AR or Hope Cancer Resources, 5835 W. Sunset Ave, Springdale, AR 72762.

Mitchell L. Jackson passed away October 28, 2020 at age 57 after a courageous battle with cancer. Mitchell was born to Bill and Marilyn Jackson September 20, 1963 in Siloam Springs, AR. Mitchell is preceded in death by his grandparents Walter... View Obituary & Service Information

The family of Mitchell Lee Jackson created this Life Tributes page to make it easy to share your memories.

Send flowers to the Jackson family.