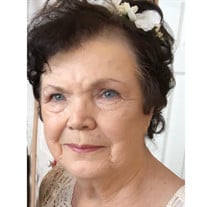 Mickey Ann Chamberlain, age 77, of Gentry, Arkansas, died on May 27, 2021, in Fayetteville, Arkansas. She was born on June 6, 1943, in Indianapolis, Indiana, to McKinley Brummett and Florence Marie Wright Brummett. Mickey married Lindy Chamberlain on August 29, 1964, in Las Vegas, Nevada. They moved from Ventura, California to Gentry and have made it their home for the last 29 years. Mickey owned and operated Old-Fashioned Sweet Shop in Gentry where she made donuts until it closed in 1998. She was preceded in death by parents, McKinley and Florence Brummett; son, Kyle Chamberlain; eight brothers and two sisters. She is survived by her husband, Lindy Gene Chamberlain; two sons, Eric Chamberlain and wife Debbie of Mansfield, Ohio, and Christopher Chamberlain of Gentry; daughter, Lynnann Marie Higgins and husband Robert, Sr. of Siloam Springs; thirteen grandchildren; sixteen great grandchildren; and numerous nieces and nephews all over the country. Memorial services will be 2:00 p.m., Friday, June 4, 2021, at Wasson Funeral Home in Siloam Springs, Arkansas.

The family of Mickey Ann Chamberlain created this Life Tributes page to make it easy to share your memories.

Send flowers to the Chamberlain family.