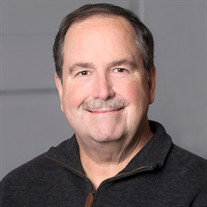 Michael “Mike” Patrick Kenney, 59 year old resident of Siloam Springs, Arkansas, entered the arms of his Loving Father after a valiant fight with cancer on December 30, 2019. Mike was born on November 27, 1960 in Evanston, Illinois to Robert and Trudy Kenney. In 1973, the family moved to Siloam Springs from Niles, Illinois. Mike graduated from Siloam Springs High School in 1978. He attended John Brown University and while there, he became the announcer for John Brown University Basketball games and Siloam Springs High School Football games at KUOA. Mike was a member of the John Brown University and Siloam Springs High School golf teams. He graduated from John Brown University with a Bachelor’s of Science Degree in Broadcast and Communications. Mike married his love, Barbara Busse, on May 17, 1986 in Siloam Springs. He worked at KUOA as program director from 1980-1986. He worked at Allen Canning Company for 28 years and Bonduelle for 2 years. Michael loved spending time with his family, and treasured his grandchildren that called him “Granddaddy.” Mike was an avid golfer, spending a lot of time at Dawn Hill and Siloam Springs Country Club courses. He coached his children’s softball, baseball, and football teams. Mike was a member and volunteer for the Siloam Springs High School Booster Club in volleyball and football. He had a strong relationship with his Lord and was a member of Sager Creek Community Church. Mike began his career in public service in 1992, when he was elected to the Siloam Springs Board of Directors and served on the Board until 2000. In 1999, Governor Mike Huckabee appointed him to serve on Outdoor Recreation Grants Advisory Committee. He served on the Siloam Springs Regional Hospital Board from 2000-2002. Mike was elected as the State Representative for District 87 from 2002-2008, where he served on multiple committees. From 2006 -2008, he served as chairman of the House Education Committee. He was preceded in death by his parents, Robert and Trudy Kenney. He is survived by his wife, Barbara; children, Mallorey Thompson and husband Branton, Meghan Layman and husband David, and Sean Kenney, all of Siloam Springs; two grandchildren, EllaMae and Baruch; sisters, Lisa Beegle and husband George of Siloam Springs, and Susan Juillerat of Gentry, Arkansas; and a host of family and friends. Memorial services will be 2:00 p.m., Saturday, January 4, 2020 at Sager Creek Community Church with Pastor Jim Henderson officiating. Burial will follow at Oak Hill Cemetery in Siloam Springs. Visitation will be from 6:00 p.m. to 7:30 p.m., Friday, January 3, 2020 at Wasson Funeral Home in Siloam Springs. In lieu of flowers, donations may be made to Sager Creek Community Church, 1010 S. Maxwell, Siloam Springs, AR 72761, or Circle of Life Hospice, 901 Jones Road, Springdale, AR 72762.

The family of Michael Patrick Kenney created this Life Tributes page to make it easy to share your memories.

Send flowers to the Kenney family.