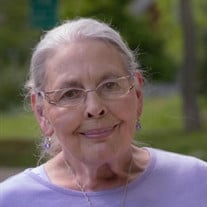 On Saturday, September 26, 2020, Mary V. Highfill, loving wife and mother of six children passed at the age of 81. Mary was born on April 13, 1939, in Colcord, Oklahoma, to James and Nettie Linam. Mary married J.C Highfill, May 12, 1956, then proceeded to have five children by the age of twenty-three...then one more.. five years later. She is survived by Ron Highfill, Annette Olsen, Susie Peckham, Donna Highfill, and Wes Highfill. She was graced with seven grandchildren. Bobbi Jo Wilson, Koyle Olsen, Michael Egan, Camille Egan, Bennett Highfill, Clara Highfill, and Caden Highfill. She was blessed to have Cindy Burns Knox of Wimberley, TX, as a very dear friend. Mary, then found herself raising six children on the banks of the Illinois River, June 8, 1972, in Siloam Springs, while J.C. was teaching in the foreign language department at John Brown University. After a few years, she received her BS in Education, December 15, 1975, from JBU. She was hired shortly after by the Siloam Springs School District to teach history in the high school. She loved her job and was very passionate toward her students. She later received her MS in Administration from the University of Arkansas, and was hired as the Assistant Principal in charge of Discipline. This was definitely her expertise and calling...as proof of many students returning to tell her “If it hadn’t been for Mrs. Highfill’s help and support...they would have never made it through school.” There was hardly a day when she didn’t have flowers on her desk, or a walkie-talkie cruising through the lunchroom carrying a day-old donut watching the students like a Hawk. Her infectious smile was passed through to her colleagues as well as to her students. She was an educator extraordinaire! After retirement she was able to travel and experience many different cultures, such as China, Mexico, Tibet, Bali, The Holy Lands, as well as many other European countries. Mary was most content with her children, grandchildren, friends, flowerbed, kitties, and watching the Illinois river rise and recede. It was her peaceful happy place. Mary was preceded in death by her Father James Linam, Mother Nettie Linam, Husband J. C. Highfill, and Daughter Debbie Bennett. There will be a memorial determined at a later date. In lieu of flowers, Mary has requested any memorial donations to go toward the Siloam Springs School District Scholarship Foundation or the Food Bank of Northwest Arkansas.

The family of Mary V. Highfill created this Life Tributes page to make it easy to share your memories.

Send flowers to the Highfill family.