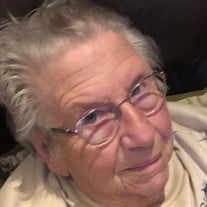 Marva Lou Walker, age 85, passed away January 11, 2022. She was in born Redmond, Oregon on October 17, 1936, to Calvin and Martha (Houston) Sherman. Marva grew up on a 53,000-acre cattle ranch on the high desert of Central Oregon. She moved to Bend and stayed with her grandparents in 1950 to attend high school at Bend High. After high school, she attended Marylhurst University in Portland and then returned to Bend and became a Licensed Practical Nurse. She met her future husband in a potato field east of Bend near the current location of the St. Charles campus. She married Wallace Walker when she was 18 and Charles was born nine months later. The couple raised their children in the Bend area where she also helped to manage Wally’s excavation business. In addition to raising their own kids, they served as foster parents for 40 children during the 1960s. Marva began her nursing career at the old hospital on the hill. After years of working as an LPN and at the age of 50, she decided to go back to school and get her Registered Nurse license. Marva was very proud of working in the ICU and of mentoring new nurses when she worked as a house supervisor on the night shift. Reflecting back Marva would tell you her love of nursing began as a childcaring for sick and injured animals on the ranch. It was common to find her bottle feeding an abandon kitten or diapering bummer lambs that needed her attention in the house until they were strong enough for life outdoors. In retirement the couple moved to an 85-acre farm in Kimberly, Oregon where Marva was a dedicated member of the Monument Senior Center. Marva’s greatest joy was her role as matriarch of the family that she loved so very much. She loved playing games and traveling with her grandchildren. She enjoyed cooking, canning, gardening and being a hostess for family gatherings. She is preceded in death by both parents and brother, Leroy Sherman. She is survived by her husband of 67 years, Wallace Walker; son, Charles and wife Linda Walker of Roseburg, Oregon, Roger Lee and his wife Denni Walker of Redmond, Oregon; daughter, Teresa Walker and Bob Rose of Oak Point, Texas; grandchildren, Jennifer and Jason Anderson, Jonathan and Christmas Walker, Chassie and Casey Martin, Calla and Travis Frazier, Ciera Yost, Wally Walker, and Sam Walker; 8 great grandchildren and a host of much-loved extended family. Family will hold services privately at a later date.

Marva Lou Walker, age 85, passed away January 11, 2022. She was in born Redmond, Oregon on October 17, 1936, to Calvin and Martha (Houston) Sherman. Marva grew up on a 53,000-acre cattle ranch on the high desert of Central Oregon. She moved... View Obituary & Service Information

The family of Marva Lou Walker created this Life Tributes page to make it easy to share your memories.

Send flowers to the Walker family.