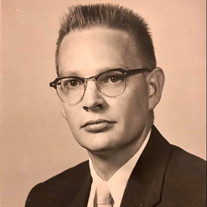 Joseph Leon Mashburn age 88 died Tuesday, December 10th in Rogers Arkansas. Joseph was born in Fayetteville Arkansas to Lillie Mae and Carl William Mashburn. Joseph had three brothers Pete Mashburn, Dr. Bill Mashburn and Dr. James Mashburn who preceded him in death. He Married Daisy Dell Edmonson Mashburn who proceeded him in death. Joseph was a Microbiologist and Chemist who worked as a quality control technician for Campbell Soup, Anderson Clayton Foods, Fisher Cheese, and Beatrice Hunt Wesson. Joseph was a Retired Major for the Army National Guard and Served active duty in the Korean War. Joseph held strong religious beliefs and was raised in the Presbyterian Church. Joseph was a Mason, holding his 32nd degree Shriner designation. He loved riding in the golf cart patrol with his fellow Masons passing out candy to children at the local parades. Joseph was a great father, husband, caretaker to his wife and children making sure there was always a roof over our heads, food on our table, and gave us the tools we needed to survive in life. He attended all of our football, basketball, track meets, and soccer games. He attended every concert, competition, and recital. For those that knew Joseph, he always had a joke to tell. Joseph was an avid Arkansas Razorback fan and alumni. Joseph is survived by his children Lisa Mashburn and spouse Connie, Mark Mashburn and Spouse Christin. Grandchildren Joseph, Vincent, Donovan, and Samara. Many Nieces and Nephews. Lastly, His faithful friend, his dachshund Bella Jo. Arrangements are being handled by Wasson Funeral Home in Siloam Springs. Joseph will be interred at the First Presbyterian church in Fayetteville, Arkansas. A memorial service will be held at a later date

The family of Joseph Leon Mashburn created this Life Tributes page to make it easy to share your memories.

Send flowers to the Mashburn family.