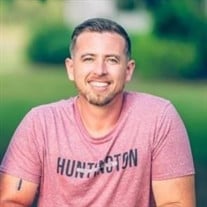 Joel Isaac Tiegreen, 36-year-old resident of Siloam Springs, Arkansas, entered his heavenly rest on April 13, 2021 at Circle of Life Hospice in Springdale, Arkansas following a fourteen month battle with cancer. He was born on January 2, 1985 in Shawnee Mission, Kansas to Roger Tiegreen and Annette (Pyle) Tiegreen. Joel grew up in Kansas and Colorado and from the time he was little; he never knew a stranger. He was friendly and engaging with everyone he met—young and old alike, and was often regarded as a leader. Sisters and friends at the dairy farm in Ottawa, Kansas as well as cousins in Littleton, Colorado were highlights for him in his youth. Pets and adventure books were also a focal point of his childhood. From birth he was taught about the Lord. The godly heritage from grandparents and parents surrounded him. Though presented with these truths from birth, his sinful nature and choices led him to follow the world. At 18 years of life, God miraculously saved him when one of his childhood friends, David Taylor, bailed him out of jail and reminded him of the gospel call to repent and believe. Joel, met his future wife, Emily Goodlin in 2007. They both went to college at John Brown University in Siloam Springs, Arkansas. They married on January 3, 2009 and became members at Covenant Church where Joel eventually was put on staff to serve as head of maintenance and oversaw the benevolence ministry. In 2015, Covenant church commissioned their family to serve as missionaries to Turkey. They served for four and a half years learning the language, sharing the gospel, and serving the church. They were members of Antalya Protestant Kilise and Fethiye Halk Kilise. In Joel’s last months of service, God opened doors for him to use his passion for solid theological books to start a publishing house. From Darkness to Light, "Karanlıktan Işığa" was one of Joel’s deepest joys. Joel’s hope was to grow old serving Christ and building His church in Turkey with his family. In February of 2020 he was diagnosed with cancer. They traveled back to the states for treatment, and 5 months later learned the cancer had terminally spread to his lungs. He entrusted his diagnosis to the Lord and fought relentlessly for 14 months. He was a protective and benevolent husband and father leading his family faithfully in worship and daily exhortation from the Bible. His greatest desire was for his children to know Christ, love the Bible, and serve Him faithfully. He had a great mix of hobbies he enjoyed with the family. Photography, exploring God’s creation, and learning countless new trades with his hands were always a part of his family life. His final months were spent with family surrounding him in the home, watching him rebind Bibles for as many people as he could. He departed for heaven in faith that God would use this trial to lead his children and others to be transformed by the gospel of Jesus Christ. Joel was preceded in death by his paternal grandmother, Jacqueline J. Tiegreen; and maternal grandfather, Jack N. Pyle. Joel is survived by his wife, Emily; their five children: Owen, Emma, Judson, Abraham, and James; his parents, Roger and Annette Tiegreen of Lawrence, Kansas; sisters, Katie Tiegreen of Lawrence, Kansas, and Kristie Crowe and husband Daniel of Shiloh, Illinois; nephews: Malachi, Judaeah, Clayton, Tre, and Kason; maternal grandmother, Glenda K. Pyle; and paternal grandfather, William D. Tiegreen. Funeral services will be 10:00 a.m., Monday, April 19, 2021 at Covenant Church in Siloam Springs, with Pastor Tad Thompson and Pastor David Taylor officiating. Burial will follow at Oak Hill Cemetery in Siloam Springs.

The family of Joel Isaac Tiegreen created this Life Tributes page to make it easy to share your memories.

Send flowers to the Tiegreen family.