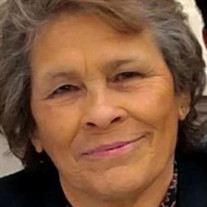 Joaquina G. Martinez was born on March 20, 1936 in Donna, Texas and departed this earth on March 6, 2022 in Maysville, Arkansas. Joaquina was the widow of Panfilo M. Martinez Jr. and mother of their seven strong-willed children. The couple were united in marriage on June 10, 1956 in South Texas and continued the next years building a life of family and farming, eventually settling in Northwest Arkansas in 1970. Joaquina was the daughter of Secundino Guerrero and Concepcion Barrera Guerrero. Along with her twin brother, Joaquin, they were the fifth and sixth to be born of the eight children. Joaquina graduated from Donna High School in 1955. Joaquina was known to be a hard working, tough, respected woman who rarely asked for help in any situation. Once settled for a few years in Northwest Arkansas and at the request of her dear friend Mary Busse, Joaquina came to work for the Decatur Child Development Center as the schools cook. She would eventually make the shift in her career to become a belt manufacturer for Gates Corporation, where she retired after 16 years of dedication to the company. As no surprise to those who knew her, the retirement life wasn’t for her and she found herself spending another decade as a Spanish/English translator in both hospital and clinic settings. Joaquina was a devout Catholic woman and was a member of Our Lady of Perpetual Help, which later became Saint Mary’s Parish in Siloam Springs, Arkansas. There she was a member of the congregation, a member and officer of the alter society, a Bishop appointed Eucharistic minister, and Sunday school teacher. Joaquina was blessed with a green thumb and loved to spend hours tending to her garden and mowing her large lawn on her John Deere. This was her special time to think and pray. Joaquina was the ultimate matriarch, happiest when she had eyes on her children, grandchildren and great-grandchildren. The Martinez clan was known for get togethers where family, friends and friends who became family, would eat, laugh and make memories on Ballman Road. Joaquina was there for it all and up making fresh tortillas the next morning. Joaquina is survived by daughters Anita Scates of Maysville, Irene Webster and husband Randy of Linden, Texas, Noelia Martinez Thomas of Sallisaw, Oklahoma and Daughter-in-Law Carla Martinez of Gravette, Arkansas. Sons Jaime Martinez and wife Charlene of Longview, Texas, Lehn Charles Martinez of Maysville and Jose Miguel Martinez and wife Michelle of Hiwasse, Arkansas. Seven grandsons, five granddaughters and fifteen great-grandchildren. Three sister-in-laws and numerous nieces and nephews. She is preceded in death by her parents, Concepcion and Secundino Guerrero, husband Panfilo Martinez, Jr. and Son Orlando Martinez. Five brothers Leandro, Valentin, Joaquin, Armador and Pedro Guerrero. Two sisters, SanJuana Yarritu and Julia Zavala. Her in-laws, Panfilo Martinez, Sr. and Concepcion Morales Martinez. Rosary will take place Friday, March 11, 2022, at 5:00 pm. to 5:30 p.m. at Wasson Funeral Home in Siloam Springs, Arkansas. Visitation will be Friday, March 11, 2022, at 5:30 p.m. to 7:30 p.m. at Wasson Funeral Home in Siloam Springs, Arkansas. Service will be Saturday, March 12, 2022, 10:00 a.m. at St Mary’s Catholic Church in Siloam Springs, Arkansas. Burial will follow at Maysville Cemetery, Maysville, Arkansas at approximately noon. Memorial contributions can be made to Maysville Cemetery Association at 25077 Loux Rd. Maysville, AR 72747.

Joaquina G. Martinez was born on March 20, 1936 in Donna, Texas and departed this earth on March 6, 2022 in Maysville, Arkansas. Joaquina was the widow of Panfilo M. Martinez Jr. and mother of their seven strong-willed children. The couple were... View Obituary & Service Information

The family of Joaquina G. Martinez created this Life Tributes page to make it easy to share your memories.

Send flowers to the Martinez family.