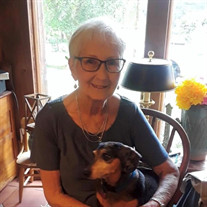 December 24, 1936 - Loss and Edna Porter were home with their four boys: Ralph, Howard, Ardell and Bennie. Around 9:30 that morning Loss sent the boys out to cut sprouts. The boys thought this was pretty unusual, but they knew better than to argue. At 11am they started back to the house. They had noticed the Dr came by but didn’t give it much thought. When they entered the house Loss called to them “get on in here, we got your Christmas present right here”. They saw their Mom with baby Jo Ann. They were all so surprised and excited. They had no idea their Mom was having a baby - those things weren’t talked about back then. Ralph, being the oldest, got to hold her first (and he was always holding her from them on). After a while Howard threw a fit because he had to wait, so he got his turn. Soon Ardell had a fit too because he wanted in his turn. Bennie was pretty young and couldn’t really hold her. The brothers where in awe of their wonderful Christmas present and all called her the best gift they ever got. Jo Ann Porter Mann entered this world as a gift from God and remained one until she left it on the morning of Saturday, November 6, 2021. She was 85 years old. Jo (as she was affectionately called by all), loved being a grandma/Nana to her ten grandchildren, thirteen great grandchildren, and seven great great grandchildren. They were her greatest treasure. She loved treating them to trips, sleepovers, making them special sweet treats and crocheting them unique blankets. Every grandchild received a special, hand made baby quilt at their birth. All 30! Her grandkids always knew her love for them was so strong and unconditional. They always knew her prayers had power and that she prayed fervently for them all. She enjoyed traveling and visits with her siblings, nieces and nephews. You could often find her watching sports while crocheting. She was an artist when it came to creating doilies. She was proceeded in death by her husband, Ronnie Mann, granddaughter Macey Kay Miller, her parents Loss and Edna Porter, sisters Donna Cannon and Grace Wolf and brothers Ralph Porter, Howard Porter and Ben Porter. She leaves behind three children; Jay Lamont, Julienne Stocks and husband Jamie, and Ronita Mann. Grandchildren; Bobby Lamont and wife Becky, Matt Lamont and wife Donna, Justin Lamont and wife Jalanie, Seth Lander and wife Kari, Tyler Lander, Adam Lander, Jarrod Mann, CJ Miller and wife Tiffany, Melissa Miller, Cooper Miller. Great grandchildren; Brittany Lamont, Kyp Hummingbird and wife Nik, Courtney (Lamont) Warner and husband Jared, Jared Lamont and wife J’nae, Klaire Lander, Charleigh Mann, Piper Mann, Chloe Miller, Kadence Brooks, Atticus Murakami, Mordecai Murakami, Stryker Murakami, Parker Miller and Tristyn Miller. Great great grandchildren; Keegan Hummingbird, Journey Hummingbird, Kaimen Hummingbird, Kaden Warner, Kallie Warner, Jaylie Lamont and Jiren Lamont, as well as siblings, cousins and countless nieces and nephews.

December 24, 1936 - Loss and Edna Porter were home with their four boys: Ralph, Howard, Ardell and Bennie. Around 9:30 that morning Loss sent the boys out to cut sprouts. The boys thought this was pretty unusual, but they knew better than... View Obituary & Service Information

The family of Jo Ann Porter Mann created this Life Tributes page to make it easy to share your memories.

Send flowers to the Mann family.