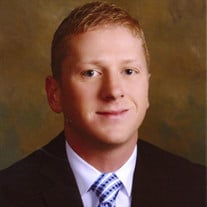 Jesse Lee McCombs, 39, a resident of Lowell, Arkansas, died unexpectedly on Monday, January 24th, 2022. Jesse was born on September 22, 1982, in Siloam Springs, Arkansas and is a member of the Cherokee Nation. Jesse was the son of the late Elden “Eddie” Leon McCombs of Colcord, Oklahoma and Shirley Woods of Muskogee, Oklahoma. In addition to his mother, Jesse is survived by his sisters Vicky Sutton (Wes) of Inola, Oklahoma, and Pamela Reed of Tahlequah, Oklahoma. He was the uncle to Blaine Vause of Hanahan, South Carolina, Chauntel McElhaney, Destiny Reed and Danielle Reed of Tulsa, Oklahoma, and great uncle to Leon McElhaney of Tulsa, Oklahoma. He is also survived by what he considered a second family of close friends in Northwest Arkansas. After graduating from Colcord High School in 2001, Jesse earned a bachelor’s degree in Business Administration from Northeastern State University in Tahlequah, OK. He then moved to Arkansas in 2005 to attend the University of Arkansas School of Law. While at the School of Law, Jesse spent a summer studying international law in Russia. Jesse spent more than thirteen years practicing law in Northwest Arkansas. He was passionate about helping his friends and clients through often difficult situations and earned the respect of his peers. Jesse is a member of the Benton County Bar Association, Washington County Bar Association, and Arkansas Bar Association. To meet Jesse was to know him. He was soft-spoken with an infectious laugh, always making people feel welcome wherever he was. He would selflessly drop everything to help a friend in need. Jesse was a loyal and dedicated fan of the Arkansas Razorbacks. He was a dutiful season ticket holder and loved tailgating before every game. Jesse was also a lover of music and the arts, participating in a book club, having season tickets to Theater Squared, and frequently attending concerts. Jesse loved to travel back to Oklahoma to visit his cherished mom, sisters, nieces, and nephews. Funeral services for Jesse will be held at 2pm on Saturday, February 5, 2022, at Wasson Funeral Home in Siloam Springs, Arkansas. Interment immediately following at Row Cemetery in Colcord, Oklahoma. Please join us to celebrate the life of Jesse with a drop in event at C4, 509 W Spring St, Fayetteville, AR from 6-9pm on February 5th. In lieu of flowers, donations can be made to the Jesse L. McCombs Memorial Scholarship. Checks may be made payable to the University of Arkansas Foundation and sent to the School of Law, 1045 W Maple St, Fayetteville, AR 72701. RE: Jesse McCombs.

Jesse Lee McCombs, 39, a resident of Lowell, Arkansas, died unexpectedly on Monday, January 24th, 2022. Jesse was born on September 22, 1982, in Siloam Springs, Arkansas and is a member of the Cherokee Nation. Jesse was the son of the late... View Obituary & Service Information

The family of Jesse Lee McCombs created this Life Tributes page to make it easy to share your memories.

Send flowers to the McCombs family.