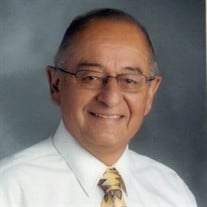 On Sunday, March 13, 2022, Jerome (Skip) Hernandez, loving husband, grandfather and long-time teacher in Siloam Springs, passed away at the age of 74. “There is an appointed time for everything. And there is a time for every event under heaven—A time to give birth and a time to die” (Ecclesiastes 3:1-2a). Skip is in the loving presence of Jesus in heaven. Skip was born on September 14, 1947 in southern California to Cande and Betty Hernandez. He grew up in Cheyenne, WY, where he attended the Nazarene Church. In high school he was active in Youth for Christ and attended John Brown University. Skip was preceded in death by his parents and three brothers, Dewey, Dick and Bob Hernandez. He is survived by his wife of fifty years Suzann; two sons David Hernandez of Bonners Ferry, ID and Jeremy Hernandez of Siloam Springs, AR; four grandchildren Kamryn, Jesse Michael , Nathan, and Elias; and his sister Sara Coulson of Cheyenne, WY. His presence will be greatly missed but he leaves a great legacy of service and love for family, friends and former students. While attending JBU he sang and traveled with the Harmoners. His college was interrupted by the draft; he joined the army in 1971-1973 and served in Vietnam. After his active service he served in the National Guard for 8 years. He graduated from JBU in 1978, where he studied education and music performance. He continued singing throughout the rest of his life. He sang with the Choral of the Ozarks in Siloam Springs and most recently with the Singing Men of Arkansas as well as in the praise team at his church and in solo performances. Skip knew God had a purpose for him and it was teaching. Mr. H, as he was known during his 37 years with fifth and sixth graders, brought to his teaching the same spark of interest and wonder that he carried into his volunteer work at New Life Ranch after his retirement in 2016. Up to the end of his life, he also continued doing the construction work that had occupied so many of his summers throughout his teaching career, and volunteered to serve other’s needs. Skip loved God and the nature all around him. He always wanted to share his knowledge about science in an exciting way. His favorite bird was the eagle. “They will mount up with wings like eagles” (Isaiah 40:31b). Visitation will be Saturday March 19, 4-6 pm at Wasson Funeral Home in Siloam Springs. His celebration of life will be Sunday, March 20, 2022 2:00 pm at Wasson Funeral Home. Memorial contributions may be made in lieu of flowers to Siloam Springs High School Scholarship Fund, or the New Life Ranch, Colcord, OK.

On Sunday, March 13, 2022, Jerome (Skip) Hernandez, loving husband, grandfather and long-time teacher in Siloam Springs, passed away at the age of 74. &#8220;There is an appointed time for everything. And there is a time for every event under... View Obituary & Service Information

The family of Jerome "Skip" Peter Hernandez created this Life Tributes page to make it easy to share your memories.

Send flowers to the Hernandez family.