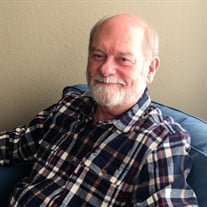 James “Jim” Clifton Henderson Jr., 71, of Siloam Springs, Arkansas finished the race on February 23, 2022, having served the Lord faithfully. Jim was born in Asheville, North Carolina on September 14, 1950 to James “Jim” and Betty “Jane” Henderson. He was the older brother, friend, and confidante to William Ronald “Ron” Henderson. After having moved from city to city during his entire childhood, his family moved to and settled in Siloam Springs in 1967 for his senior year in high school. During the summer of ‘67, Jim met his future bride, Barbara Gratzl, and they began dating. They married on June 22, 1969. In 1972, Jim was working for his father who had opened a fabric store in Jay, Oklahoma. It was there that he met an older female coworker who, through her conversations with him, opened his eyes to spiritual things. Her influence on his life caused him to dig into the Word and pursue a vibrant, personal relationship with Jesus Christ. Starting in 1975, Jim served as pastor at Steel Bible Church in Tontitown before becoming the pastor of Weddington Missionary Baptist Church from 1981 to 1983. During this time period he also served many churches as interim pastor as well as filling in as a guest pastor. Jim was also in the masonry and construction business starting around 1973. He owned 2 businesses during that time and built houses throughout Northwest Arkansas. In 1977, Jim and Guy Strickland started Strhen Corporation, which was a commercial masonry company. Jim Henderson Construction, Inc. was active from 1983 until 1998, at which time Sager Creek Community Church was founded. Jim’s desire was to teach scripture in a practical way and help believers apply it to their lives. In order to do this, he was devoted to teaching the Word verse by verse, book by book. He said the Bible was God’s love letter to His children and it should be studied in completion. His burden for Siloam Springs was to help grow believers through deep teaching of the Word of God. Jim’s gift of wisdom was not only evident from the pulpit but also through the counseling he has provided others for the past 40 years. His heart and love for people was apparent to all who knew him as he gave willingly of his time, wisdom, prayers, and concern. He thoroughly loved the staff of Sager Creek Community Church and often shared about how good God had been to all of them, both in and through their relationships with one another. Beginning in his childhood, Jim grew to love hunting and fishing. He was an outdoorsman through and through. Whether he was on a boat, in a tree stand, or trekking through the woods, he was in his element. He especially loved sharing the wonder of God’s creation with his grandchildren and friends. He enjoyed traveling with his wife, Barbara, whether near or far. They frequented Branson often, made trips across the country to visit their children and took one of their favorite trips in 2015 when they embarked on a roadtrip through the Badlands and across to Yellowstone. The best way to describe Jim is to say that he was an incredibly faithful servant of God. Before his passing he made it clear that he was at total peace and that he had lived his entire life for this day. He had no regrets and was ready to be in the presence of Jesus. The heartbeat of his life, the deep desire of his ministry, was that others might live in the same manner; wasting not a day but striving to grow closer in their relationships with the Lord each day. He lived in light of eternity and inspired countless others to do the same. He implored believers to: “Draw a line in the sand and start fresh with God today.” “Walk on a higher plane than you ever have before.” “Go out and live [for Christ] with all the gusto you can!” Jim was preceded in death by his parents, Jim and Jane Henderson. He is survived by his wife of almost 53 years, Barbara “Gratzl” Henderson, three children, daughter Julie (and Johnny) Mason, son Josh (and Meredith) Henderson, and daughter Johanna “Jonna” (and James) Nixon, and five grandchildren who lit up his world: Elenna and Leah Mason, Parker Nixon, Kyle and Caleb Henderson; and brother Ron (and Doris) Henderson, six nieces and nephews, and a host of cousins. Jim wanted it to be known he did not die because of Covid. Long ago, God determined the exact moment He would take Jim home; Covid was just the avenue He used to accomplish His purpose. Do not be afraid. “You made all the delicate, inner parts of my body and knit me together in my mother’s womb. Thank you for making me so wonderfully complex! Your workmanship is marvelous—how well I know it. You watched me as I was being formed in utter seclusion, as I was woven together in the dark of the womb. You saw me before I was born. Every day of my life was recorded in your book. Every moment was laid out before a single day had passed. How precious are your thoughts about me, O God. They cannot be numbered! I can’t even count them; they outnumber the grains of sand!” Psalm 139:13-18 NLT Memorial services will be 10:00 a.m., Saturday March 5, 2022, at Sager Creek Community Church, Siloam Springs, Arkansas. Visitation will be held on Friday, March 4, 2022, at Sager Creek Community Church, Siloam Springs, Arkansas, from 5:00 P.M. to 7:00 P.M. Memorials may be made to The Gideons International (www.gideons.org) or Sager Creek Community Church (www.sagercreek.com).

The family of James "Jim" Clifton Henderson Jr created this Life Tributes page to make it easy to share your memories.

Send flowers to the Henderson family.