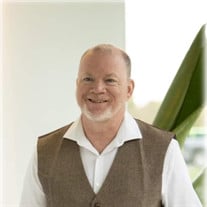 James Bryan Harmon, 55-year-old resident of Ozark, Missouri died at Mercy Hospital in Springfield, Missouri on March 22, 2022. He was born on June 15, 1966, to James Harmon and Nancy Waller. James married the love of his life, Joey Devine, in... View Obituary & Service Information

The family of James Bryan Harmon created this Life Tributes page to make it easy to share your memories.

Send flowers to the Harmon family.