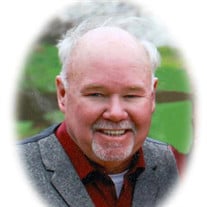 James Lee Gittlein, 72, of Decatur, Arkansas passed away suddenly on January 30, 2022 at Northwest Medical Center in Bentonville, Arkansas surrounded by his family. Jim was born on June 6, 1949 in Zenith, Kansas to Alexander and Agnes (Sheahan) Gittlein. Growing up he attended Jumbo Elementary School, in Wichita County, Kansas and graduated from Wichita County High School. He went on to attend Hutchinson Community College and served in the U.S. Army Reserve. On December 22, 1973 he married Deandra Elder of Leoti, Kansas. The two settled there and Jim worked for many years as a farmer and rancher. He was a smart, witty, dependable and capable man that knew no stranger as he enjoyed getting to know people and tell stories. Jim was an avid hunter, golfer and a classic car enthusiast. He was particularly fond of Ford Mustangs. But most importantly, Jim was a loving husband, wonderful father and a papa that loved his grandchildren dearly. Jim was also a man of strong Christian faith. While living in Leoti, Jim was a trustee and deacon of the First Baptist Church. After retiring and moving to Decatur, Arkansas in 2010, Jim helped his son Garrett with his farming and ranching operation and later became a member of the Victory Missionary Baptist Church in Gentry, Arkansas. His surviving family members include his wife, Deandra of Decatur, Arkansas. Two children, Lacy & Pete Williams of Wichita, Kansas and Garrett & Amanda Gittlein of Bentonville, Arkansas. Four grandchildren, Cohen Williams of Wichita, Kansas and Mason, Colson and Madison Gittlein of Bentonville, Arkansas. Three siblings, Jerry & Joan Gittlein of Rye Beach, New Hampshire, Chris & Delmer Brady of Garden City, Kansas and Alice & John Tom Bilberry of Branson, Missouri. He is proceeded in death by his parents and two siblings. Memorial services will be held at 11:00 am on Saturday, February 19, 2022, at Victory Missionary Baptist Church in Gentry, Arkansas with Pastor Bill Sheffield officiating. Memorials in lieu of flowers may be made to Loving Choices in care of Wasson Funeral Home in Siloam Springs, Arkansas

James Lee Gittlein, 72, of Decatur, Arkansas passed away suddenly on January 30, 2022 at Northwest Medical Center in Bentonville, Arkansas surrounded by his family. Jim was born on June 6, 1949 in Zenith, Kansas to Alexander and Agnes (Sheahan)... View Obituary & Service Information

The family of James Lee Gittlein created this Life Tributes page to make it easy to share your memories.

Send flowers to the Gittlein family.