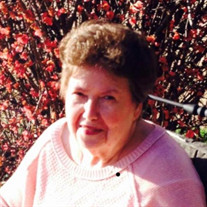 Hazel Louise Johnson, 85, of Siloam Springs passed away September 21st at Siloam Springs Nursing and Rehab. She was born February 7, 1935 near Muldrow, Oklahoma to Alfred and Ethel Lollis. She married Paul Johnson in 1956 and remained married to him until his death July 24, 2009. Hazel and Paul lived in Marvell, Arkansas from 1964 until 1981, at which time they moved to London, Arkansas and she remained there until 2013 at which time she moved to Siloam Springs. She worked various jobs during her career including the Dollar Store in Marvell, AR and ConAgra in Russellville, AR but will be remembered most as a homemaker to her loved ones. She was a member of London First Baptist Church and trusted in Jesus as her Savior. She was preceded in death by sisters Jean, Pat, Ruth, Willie Jo, and brothers MT and Hershel and Daniel Johnson, grandson. Survivors include three sons and their wives; Earl and Regina Johnson of Westville, Ok; Donnie and Debbie Johnson of Redfield, AR; and Steven and Leann Johnson of Siloam Springs, AR. She also leaves behind seven grandchildren; Manon Smith, Bridget Simmons, Justin Johnson, Matthew Johnson, Joshua Johnson, Michael Wetzel and Toddy Wetzel and several great grandchildren. The family would like to thank the compassionate caregivers at Siloam Springs Nursing and Rehab who have cared for her over the past 5 years as well as Elite Hospice for for their compassionate care. Due to COVID-19 there will be a private funeral service at Wassons Funeral Home for family. Hazel will be laid to rest by Paul in Turner, Arkansas. In lieu of flowers the family requests donations be made to Kind at Heart Ministry at www.kindatheart.org. Online condolences can be expressed at Wassonfuneralhome.com.

Hazel Louise Johnson, 85, of Siloam Springs passed away September 21st at Siloam Springs Nursing and Rehab. She was born February 7, 1935 near Muldrow, Oklahoma to Alfred and Ethel Lollis. She married Paul Johnson in 1956 and remained married... View Obituary & Service Information

The family of Hazel Louise Johnson created this Life Tributes page to make it easy to share your memories.

Send flowers to the Johnson family.