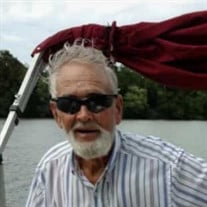 Harold Loyd Nichols was born to George and Susie (Smith) Nichols on February 14, 1937, near Isabella, Oklahoma. He softly slipped away on August 27, 2021, at Quail Ridge Living Center, Colcord, Oklahoma, after several debilitating strokes. Dad’s growing up years around Fairview, Oklahoma, were filled with lively, good times and the daily chores that revolve around living on a farm. Home, to him and his family, was a place of security, a place where he felt love and belonging. Dad received an education at Standard School, a small, one-room country school. It was near their home, and he usually walked or rode horse. Feeling the need to be right with God, he had an experience of salvation and was baptized on March 15, 1950, by his father, Minister George Nichols. While an adolescent, he and his family spent some time in Mexico, and dad carried a love for the language, culture, and its people throughout his life. At the age of sixteen dad left home to begin working with his brother Vernon custom harvesting and later working on building a grain elevator in Enid, Oklahoma. On November 24, 1957, Harold was united in marriage to Shirley Nichols at Greensburg, Kansas. Three sons were born to this home, making us a family unit. Our first home was in Moundridge, Kansas, moving very shortly to Greensburg, Kansas. Dad earned a living in a number of different ways; grain farming, ranching, trucking, and poultry farming were his main occupations. He was adventurous but hardworking, diligent, and resourceful, unafraid to embark in a new enterprise. Our years spent living at Copeland, Kansas, have many good memories attached to them. There we made our living grain farming on the rich plains of western Kansas. Dad was always a lover of music and enjoyed being a part of a quartet that often sang together. We also lived in the Detroit, Texas, area, and the time spent ranching and being a part of the church community was a very special time to us that we continue to treasure. In the early 1990’s we moved to the Gentry, Arkansas, area. Here dad took up poultry farming as his main occupation. Life has blessed us here also with many rewarding experiences, friendships, and opportunities to serve the Lord. He enjoyed being involved with a jail ministry program, helping in disaster relief work, and offering assistance to those whom he could help by easing the burdens of daily living. Our father was a man of principle but faced life, its challenges, and good times, with daring and spontaneous enthusiasm. He was a peacemaker at heart and had the gift of hospitality together with being a good conversationalist. He was comfortable to visit with and it was easy to relate to him. Camping trips and going fishing were activities he enjoyed, and we have many eventful memories from these occasions. Dad loved his family and often prayed for them and for those who had special needs. Nearing the end of his life, as his health began to fail, God drew near to dad and confirmed his faith. This brought a reassurance to us as a family of his salvation. As he endeavored to make his way clear, his spirit became gentle and mellow, and this was apparent evidence of his preparation to make death’s crossing. The witness he left to us, and his caretakers was a resounding testimony for the Lord and his wonderful grace. Those left behind are his loving wife, Shirley of Gentry, Arkansas, three sons, Kent and Becky of Gentry, Arkansas, Lonnie and Jan of Copeland, Kansas, Layne and Marci of Gentry, Arkansas; two brothers and two sisters, Naomi Wenger of Newton, Kansas, Galen and Bernice Nichols of Fairview, Oklahoma, June and Harold Jantz of Fredonia, Kansas, and Jack Nichols of Fairview, Oklahoma. He also leaves behind his brothers-in-law and sisters-in-law, Marlene Nichols of Walker, Missouri, Wanda Litwiller of Ithaca, Michigan, Galen and Shirley Nichols of Greensburg, Kansas, Neoma Wadel of Greensburg, Kansas, Lavada and Carl Yost of Detroit, Texas, and Glenda Nichols of Greensburg, Kansas. He was predeceased by his parents, two brothers, two sisters, parents-in-law, and five brothers-in-law. Harold’s family also wishes to express their appreciation to the staff at Quail Ridge Living Center for the excellent care he received. A funeral service will be held at 10:00 am, Tuesday, August 31, 2021, at Gentry Mennonite Church, Gentry, Arkansas. Burial will follow at Gentry Mennonite Cemetery, Gentry, Arkansas.

The family of Harold L. Nichols created this Life Tributes page to make it easy to share your memories.

Send flowers to the Nichols family.