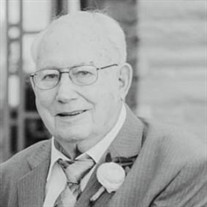 Gerald “Jerry” Arlow Jenison, previously of Siloam Springs, Arkansas, went to be with his Lord and Savior on January 25th, 2022. He passed peacefully at his home in Charleston, Arkansas, surrounded by his loving family. Born October 23rd, 1926, in Enid, Oklahoma, he was the son of Arlow and Ruby Jenison. Jerry grew up on a farm northwest of Enid where he helped with the family dairy farm, learned to grow and harvest all types of crops, swam in the creeks and ponds, rode horses, and had many adventures with his brother and cousins. He was a 1944 graduate of Enid High School, where he excelled in both sports and academics. Following graduation, he enlisted in the Navy. After his discharge, he came home and attended Phillips University in Enid, graduating with a bachelor’s degree in Business Administration. It was in college where he met the love of his life, Patricia “Pat” Anne Donica. Jerry and Pat were married on February 15th, 1953, at Pennsylvania Avenue Christian Church in Oklahoma City, where Pat was serving as the Religious Education Director. They resided in Tulsa for two years where Jerry worked as a statistician at Douglas Aircraft Company. Two of their four children, Mike and Rick, were born in Tulsa. In 1955, Jerry and Pat bought a 120-acre farm outside of Siloam Springs. This would be the home they dreamed of and where they would raise their growing family, adding another son, Jerry Pat, and finally a daughter, Julianne. Jerry continued to commute to Tulsa, an hour and a half drive one-way, for the next 6 years, never missing a day of work. In 1961, he began working at Brand Rex in Siloam Springs as a Process Engineer. Jerry and Pat were very active in their church, working with young people and serving in many areas. In 1962, Jerry and Pat became involved in Cookson Hills Christian School, taking young, troubled children into their home to provide a stable, Christian environment. The following year, they moved their family to the school to become educators and full-time house parents to 7 boys, moving back to their farm in 1966. Jerry was a charter member and elder of Twin Springs Christian Church; now Community Christian Fellowship. Throughout the years, Jerry and Pat ministered to hundreds of young people through youth groups, sponsorships, Sunday school classes, and their work with Cookson Hills, leaving a legacy of what it means to answer God’s call to serve others. Jerry was known for his love of fishing, camping, skin diving, farming, and storytelling. He played a mean game of Wahoo and Carrom, could hit any target with a bow and arrow or rifle, had a wonderful sense of humor, could tell you the name of any bird that he saw, and could solve the most difficult of mathematical equations. He had a steadfast faith, loved unconditionally, had a kind and gentle spirit, a warm smile and an endearing “wink.” He was loved, admired and respected by all who knew him, and all who knew him were blessed by knowing him. Jerry was preceded in death by his parents, his brother, Eugene, his loving wife of 56 years, Pat, two sons, Richard “Rick” Allen Jenison and Michael “Mike” Edward Jenison, a granddaughter, Jennica Holloway and a granddaughter-in-law, Becca Jenison. He is survived by his son, Gerald Patrick “Jeep” Jenison (Julie) of Oklahoma City, Oklahoma, a daughter, Julianne “Juli” Jenison Stec (Steve) of Charleston, Arkansas, a daughter-in-law, Luann Jenison of Siloam Springs, grandsons, Kelby Jenison, Corey Jenison (Jessica), Jay Jenison (Baylee), Amia Stec (Sarah) and Aaron Jenison (McKenzie), granddaughters, Jerra Thomas (Jeremy), KaLee Greenwood (Chad), Barbara “Jennon” Holloway, Jettie Shirley (Hunter) and Heather Wynn (Steve), seven great-grandchildren, a cousin, Don Morgan, several nieces and nephews, and a host of friends who have all been blessed by this amazing, one-of-a-kind man. Funeral services will be held 2:00 p.m., Sunday, January 30, 2022, at Community Christian Fellowship, Siloam Springs, Arkansas, with Jay Foley and Jonathan Seauve officiating. Graveside to follow at Oak Hill Cemetery and reception at CCF. Arrangements under the direction of Wasson Funeral Home. A special thank you for the compassionate care provided by Mercy Hospice - Fort Smith, Arkansas.

Gerald &#8220;Jerry&#8221; Arlow Jenison, previously of Siloam Springs, Arkansas, went to be with his Lord and Savior on January 25th, 2022. He passed peacefully at his home in Charleston, Arkansas, surrounded by his loving family. Born October... View Obituary & Service Information

The family of Gerald "Jerry" Arlow Jenison created this Life Tributes page to make it easy to share your memories.

Send flowers to the Jenison family.