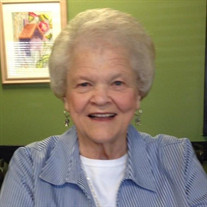 Marilyn Danley, 87, of Siloam Springs, Arkansas went peacefully to live with her Savior on Friday evening, February 11, 2022. Marilyn was born on October 6, 1934, to Roy and Audie (Mayes) Wright in Mt. Ida, Arkansas. Her parents were both educators, and after graduating from Mt. Ida High School, Marilyn went on to get a degree in Music Education from Henderson State Teachers College in Arkadelphia, Arkansas, and then taught school for several years. Marilyn married her high school sweetheart, Bert Danley, Jr on July 21, 1956, in Mt. Ida, where they made their home for the first few years of their marriage. In 1960, she and Bert moved to Bartlesville, Oklahoma, where Bert worked for Phillips Petroleum Company for over 25 years. Marilyn was very involved in the music program and other ministries at First Baptist Church, Bartlesville where she made many life-long friends. After Bert’s retirement in 1986, they moved to Siloam Springs, Arkansas and began the next wonderful stage in their life’s journey. Marilyn and Bert became very involved at First Baptist Church, Siloam Springs, serving on the “social committee” where they laughed a lot and made many more life-long friends. After Bert’s death in 1995, Marilyn continued to be a vital part of the Music Ministry at FBC Siloam Springs and served in many different capacities including Joy Choir, Young at Heart and the “Funeral Food” Committee. Marilyn had many gifts that she shared willingly and unselfishly with others. She had a beautiful voice, played handbells, and taught music to many children. She was an amazing cook, seamstress and hosted people in her home until the very end, including the week of her death. She was a wonderful Mom, MeeMaw, Aunt and encourager to anyone who needed a listening ear and a little love and direction. Although she had significant health challenges the last 2 years of her life, Marilyn faced those days with determination and good humor and was able to live independently even when it became difficult for her. The last testimony she shared whenever asked about her illness was “God has promised to take care of me, and I know that He has and always will”. Her faith in Jesus Christ sustained her and was an amazing example and inspiration to all of those around her. The family would like to thank her many friends in Siloam Springs who have supported her in the last 2 years and allowed her to continue living her life as she wished and continue to be a blessing to others. Marilyn is survived by her son William “Bill” Danley and Rhonda of West Plains, Missouri, her daughter Keri and Erik Akers, of Broken Arrow, Oklahoma, her “perfect” grandchildren, Allyson and Daniel Akers, as well as several nephews and nieces that were “partly hers” and many friends who were like family. Preceding her in death were her husband Bert and 2 sisters, Jessie Faye Scruggs and Royce Hicks. Family graveside services will be held at Oak Hill Cemetery in Siloam Springs, Arkansas at 11:00 am on Friday, February 18th followed by a memorial service at First Baptist Church, Siloam Springs at 2:00 pm.

Marilyn Danley, 87, of Siloam Springs, Arkansas went peacefully to live with her Savior on Friday evening, February 11, 2022. Marilyn was born on October 6, 1934, to Roy and Audie (Mayes) Wright in Mt. Ida, Arkansas. Her parents were both educators,... View Obituary & Service Information

The family of Frances Marilyn Danley created this Life Tributes page to make it easy to share your memories.

Send flowers to the Danley family.