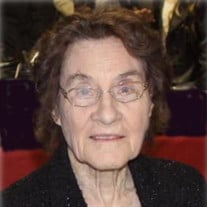 Evelyn Lucile Butts was a loving wife, mother, grandmother, sister, and friend. She relocated peacefully from her home in West Siloam Springs, OK on July 4, 2021 at the age of 96 to her eternal home in heaven. Evelyn was born on December 31, 1924, in Curtis, Oklahoma to Reverend Walter and Grace Gore. Living in a pastoral family with five brothers and two sisters made life always eventful and centered around the church, family, and work. Evelyn found time to study, play sports and stay involved in church activities, including singing with her siblings. After graduation from Moreland High School, she worked until she met a young man named John Butts, who had recently gotten saved in one of her dad's services. They fell in love, got engaged, and then married on April 3, 1950. Together they farmed, and often Evelyn would be out plowing the fields on the John Deere, raised cattle, and soon started a family. To this union were born four children, Larry Wayne, James Paul, John William III, and Carol Lucile. Early in their marriage, Evelyn and John sensed the call to ministry. Together they constructed the Leedey Assembly of God Church. Now, their focus was pastoring as well as farming. A little later, John felt that God was calling him into partial missionary service, so Evelyn took the responsibilities of raising the children when John was on the evangelistic and missionary field in Africa. In many of the revivals, John and Evelyn would sing melodious gospel songs. In 1970, the family moved to eastern Oklahoma. John and Evelyn pastored and ministered in various churches until 1976, when they started the West Siloam Assembly of God Church. John, his three sons, and numerous members built the facility and Evelyn was always there ready to lend a hand. Evelyn was an amazing lady, and the significant feature of the week was the Sunday dinners she prepared, where all the family and guests gathered to eat a feast that she started cooking on Saturday evening. Evelyn was well known for her excellent cooking, friendliness, and hospitality to the many guests, missionaries, and evangelists who stayed at her house. In addition, she enjoyed family reunions, outings, and watching her children and grandchildren play basketball. One of her biggest joys was taking care of and spending time with her grandchildren. Furthermore, a favorite event she looked forward to was attending the Gore Family Reunion on July 4, every other year. Interestingly enough, the Lord took Evelyn home on July 4th to her eternal home in heaven. After almost 63 years of marriage, John passed on to glory on March 19, 2013. After his death, Evelyn carried on faithfully, never missing church, continuously supporting the family, and still the faithful homemaker. Besides her husband John, her parents Walter and Grace Gore, two brothers, Warren and Paul Gore, and one sister, Leota Meyer preceded her in death. She is survived by her three sons and daughter-in-laws, Larry and Carolyn of San Diego, California, James and Beth of Noel, Missouri, and John III and Belinda Butts of West Siloam Springs, OK and one daughter and son-in-law, Carol and David Schmidt of Cameroon, Central Africa. Eight grandchildren and eight great-grandchildren: Derek Butts of Converse, Texas, and children Hunter and Kinsleigh; Lindsey Steel of Boise, Idaho and children Covey and Eilee; Ryan and Jenny Schmidt and son, Jack; Melanie and Ben Jameson; Nathan Schmidt; and Aaron Butts all of San Diego, California; Kristin and Bronson Stanley and children, Kiersten, Jackie, and Courtney; and Jenna Butts all of West Siloam Springs. One sister, Lelah Gore of Las Cruces, New Mexico, three brothers, Walter Gore of Deming, New Mexico, Raymond and Charlotte Gore of San Antonio, Texas; Earl and Rita Gore of Concord, California and brother-in-law, Rev. Dennis Meyer of Miller, Missouri. And many nieces and nephews.

Evelyn Lucile Butts was a loving wife, mother, grandmother, sister, and friend. She relocated peacefully from her home in West Siloam Springs, OK on July 4, 2021 at the age of 96 to her eternal home in heaven. Evelyn was born on December... View Obituary & Service Information

The family of Evelyn Lucile Butts created this Life Tributes page to make it easy to share your memories.

Send flowers to the Butts family.