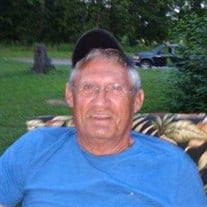 Edward J. Paczowski Sr. 90, of Gentry, Arkansas, died on November 22, 2021. He was born on February 11, 1931, in New Haven, Connecticut, to Michael Paczowski and Margaret Peabody Paczowski. He was raised in East Lyme, CT. He joined the United States Navy at the age of 17. He married Mildred (Millie) Brackus on January 25, 1955 in Connecticut. His time in the Navy took him to many ports around the world and he served in WWII and Vietnam wars. He was an E6 Navy Veteran and received several Bronze Star Medals, including a Vietnam Service Medal. After retiring from the Navy, Ed and Millie moved from San Diego, CA to Gentry, AR where they lived the rest of their years. He is preceded in death by his wife, Mildred (Millie) Paczowski; daughter, Rena Ann Esquivel; brothers, William George Paczowski, and Michael Paczowski; sisters, Evelyn Mary Murray and Dorothy Ann “Dottie Ann” Rix. He is survived by two sons, Edward Joseph Paczowski, Jr (Skip) and wife Sheila, of Sulphur Springs, Arkansas, and William George Paczowski (Bill) and wife Tanya, of Gentry, Arkansas; one daughter, JoAnn Frances Sixkiller and husband Richard, of Kansas, Oklahoma; twelve grandchildren and eight great-grandchildren. All of whom Ed loved very much. He was a diehard Red Sox and Patriots fan and an avid fisherman. He and Millie owned The Red Barn in Noel, MO for several years where Ed loved to spend time with his close friends. Visitation will be held Friday, November 26, 2021, from 6:00 to 8:00 PM, at Wasson Funeral Home in Siloam Springs, Arkansas. Graveside service will be held Saturday, November 27, 2021, at 1:00 PM, at Gentry Cemetery in Gentry, Arkansas.

Edward J. Paczowski Sr. 90, of Gentry, Arkansas, died on November 22, 2021. He was born on February 11, 1931, in New Haven, Connecticut, to Michael Paczowski and Margaret Peabody Paczowski. He was raised in East Lyme, CT. He joined the United... View Obituary & Service Information

The family of Edward J. Paczowski Sr. created this Life Tributes page to make it easy to share your memories.

Send flowers to the Paczowski family.