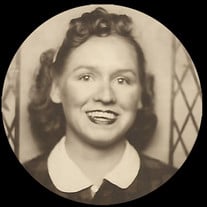 Edna May Portis was born in Riverside, California, on May 3, 1920, to Charles and Cora Portis. After Edna’s mother died in 1922, she remained motherless until 1924 when her father married Nellie, the stepmother who raised her. Edna spent her childhood throughout California, including Mendota, where her father ran “Portis Trading Post;” and Hollister, where Edna lived with her sister Mary until she married Louis West in 1941. Edna and Louis had three children—Maxine, Richard, and Dorothy. While raising her children, Edna also worked in food processing and agriculture. In 1965, Edna and Louis moved to Kingman, Arizona, where Edna began working for the United States Postal Service. She worked for the Postal Service—as a mail sorting clerk—until she retired at the age of 78. In 1973, Edna and Louis moved to Mesilla Park, New Mexico, where they built a house. Less than two years later Louis passed away. During the years after Louis’s death, Edna continued to work the night shift at the Post Office, but took every opportunity to visit her children, grandchildren, and her twin siblings Mary and Norman. Edna loved to travel, and it was during those years that she took numerous trips with her sister Mary, niece Florence, and sister-in-law Adell. Toward the end of her working life, Edna began to exhibit signs of Alzheimer’s. When she retired in 1998, she moved to Tucson to live in the same neighborhood as her son Richard. Richard and his wife Barbara looked after Edna’s increasing needs until Richard and Barbara’s own retirement. In 2006, Edna moved to Arkansas to live with her daughter Maxine. Maxine and her husband Gene would care for Edna—first next door and then in their own home—until Edna’s death on March 6, 2021, just months shy of her 101st birthday. Edna is survived by her daughter Maxine Abernathy and son-in-law Gene, and son Richard West and his wife, Barbara. Edna has four grandchildren: Lane West, Nicol Haines, Heather Graham, and Rachel Braff. Edna has six great-grandchildren and three great-great-grandchildren. Edna was preceded in death by husband Louis, daughter Dorothy, sister Mary, and brother Norman. Edna was a much-beloved woman who valued family and friendship above all else. She was a person of great warmth, generosity, and kindness. Her grandson, Lane, describes her as a woman with “a heart of gold.” No one who knew her would disagree.

Edna May Portis was born in Riverside, California, on May 3, 1920, to Charles and Cora Portis. After Edna&#8217;s mother died in 1922, she remained motherless until 1924 when her father married Nellie, the stepmother who raised her. Edna spent... View Obituary & Service Information

The family of Edna May West created this Life Tributes page to make it easy to share your memories.

Edna May Portis was born in Riverside, California, on May 3,...

Send flowers to the West family.