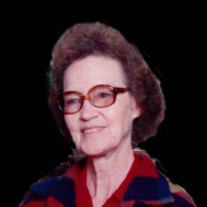 Dorthy “Arvilla” Requa Hill age 91 of Bentonville, Arkansas, passed away on Tuesday, January 26, 2021, peacefully, surrounded by her daughter and loving caregivers at the Gardens at Osage Terrace, her home for the past 7 years. She was born as the great depression was beginning, on October 29, 1929, near Cassville, Missouri to Fred and Pearl E. Requa. She married Lonnie Wormington of Purdy, Missouri in 1943. They moved to Arvin, California where he died in an accident in October of 1954 at the age of 18. Two months later Arvilla gave birth to their daughter, Dorothy L. Wormington. In 1947 she married Cleburn “Sammy” Hill, they made their home in California before moving to Siloam Springs, Arkansas in 1963 where Sammy opened Sam’s Radiator Shop. Their son Ronnie L. Hill was born in 1948. Arvilla worked for Franklin Electric until it closed. Once again, she became a widow when Sammy passed away suddenly in December 1975 at age 54. She worked many years for Siloam Springs Nursing Home before retiring. She decided to return to work at Southside Elementary near her home, where she enjoyed helping serve lunch to the children, until she was 81 years old and forced to retire for health reasons. She loved to travel, visited many state including Hawaii and was part of a group of square dancers for a time, loved Bar-B-Q and Mexican food. She enjoyed watching old westerns, Judge Judy and 5 o’clock news and did not mind telling you if you called during that time. She moved to Bentonville in 2013, to live near her daughter, Dorothy Dye, who survives her. Also surviving her son Ron Hill and wife Laura of Oceanside, California; 10 grandchildren, several great grandchildren and great great grandchildren, nieces, and nephews. She was preceded in death by her parents, all her siblings, Ross, Charles and Gene Requa, sisters Doris, Retha, Barbara and Sharon. Graveside service will be 2:00 p.m., Friday, January 29, 2021 at Oak Hill Cemetery, Siloam Springs, Arkansas. “Little Granny” we love you and will surely miss you, may you rest in peace now with our Lord and Savior, your long earthly journey complete.

Dorthy &#8220;Arvilla&#8221; Requa Hill age 91 of Bentonville, Arkansas, passed away on Tuesday, January 26, 2021, peacefully, surrounded by her daughter and loving caregivers at the Gardens at Osage Terrace, her home for the past 7 years. She... View Obituary & Service Information

The family of Dorthy "Arvilla" Hill created this Life Tributes page to make it easy to share your memories.

Send flowers to the Hill family.