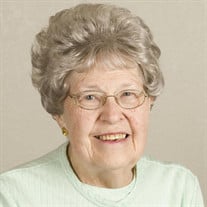 Dorothy Gerdts (98) of Kansas, OK, left this life to enter a new and better one with Jesus on September 7, 2021 at Clarehouse in Tulsa, OK. A Homegoing Celebration will be held Saturday, Sept. 11, at Ridge Chapel with visitation beginning at 10:00 a.m. and a Memorial Service at 11:00. A graveside service will follow at 12:00 in the Cookson Hills Cemetery. In lieu of flowers, memorial gifts may be sent to Cookson Hills Christian Ministries, 60416 Hwy 10 Kansas, OK 74347. Dorothy Wilma (Redman) Gerdts was born on March 23, 1923 (3/23/23), in Muscatine, IA, a daughter of Clarence and Wilma (Holcomb) Redman. The second youngest of six children, she grew up on a busy “truck farm” by the shores of the Mighty Mississippi River, where her family raised produce including melons, asparagus, tomatoes, and other vegetables, and some livestock. Her parents were dedicated Christians who reared their family in the love of the Lord, and Dorothy began walking closely with Him at an early age. She also began piano lessons at an early age, and quite soon became a proficient pianist and organist. For over 70 years, she regularly played one or both instruments in four congregations in three different states where she lived. She also taught both instruments all those years to hundreds of students, all of whom will attest to her skillful patience in teaching them to appreciate and produce the music that she loved. She graduated from Muscatine High School in 1940. Dorothy married Edwin E. Gerdts on May 29, 1942, in Muscatine, a few months before he was drafted into the U.S. Army. He served in the Army Corps of Engineers in the Pacific Theater of Operations for two and a half years. Upon his return home in 1945, they lived in Chicago for a year while he pursued further education as a draftsman. After a few more years in Muscatine, he took a job with the U.S. Bureau of Reclamation and they moved to Huron, SD, where he served on the team that designed a series of hydroelectric dams on the Missouri River. When that project was completed, he stayed in civil service as a postal clerk in the Huron Post Office. Meanwhile, Dorothy was a faithful homemaker, church and community volunteer, and music teacher. She and Ed have three children – Barbara and Beverly (born in Muscatine) and Thomas (born in Huron). In September of 1968, Ed suffered a major stroke which resulted in paralysis of his right side and inability to converse. From that day forward for over 32 years, Dorothy demonstrated extraordinary and inspirational faithfulness in assisting Ed to experience a high and productive quality of life. No one who observed her dedication to him in that role will ever forget it. In May of 1975, Dorothy and Ed moved to Kansas, OK, and began serving at Cookson Hills Christian Ministries, a Christian children’s home. Dorothy taught piano lessons to many children and adults, Ed worked at the food storeroom, and both were unofficial grandparents to many of the children and youth. Dorothy’s family is very grateful to Cookson Hills for providing them (Ed for 26 years, Dorothy for 46 years) with a secure, loving atmosphere in which they could continue to work productively for the Kingdom of God. Ed went to be with the Lord on April 26, 2001. Dorothy’s entire life was characterized by an unselfish, kind, and gentle spirit. She consistently displayed the “fruit of the Holy Spirit” mentioned in Galatians 5:22-23. All glory goes to God, because He is the one who inspired and empowered her to live in this way. Today, we are full of joy because of her “Victory in Jesus”. Her favorite song – “The Lord Is My Light and My Salvation” (from Psalm 27) is a beautifully accurate reflection of her life. Dorothy is survived by her children: Barb and husband Rod Ramsell (Kansas, OK), Bev and husband Dan Fritz (Moore, OK), and Tom and wife Karen Gerdts (Clear Lake, IA); ten grandchildren; 18 great-grandchildren; and three great-great-grandchildren. She was preceded in death by her husband, parents, three sisters, and two brothers.

Dorothy Gerdts (98) of Kansas, OK, left this life to enter a new and better one with Jesus on September 7, 2021 at Clarehouse in Tulsa, OK. A Homegoing Celebration will be held Saturday, Sept. 11, at Ridge Chapel with visitation beginning at... View Obituary & Service Information

The family of Dorothy W Gerdts created this Life Tributes page to make it easy to share your memories.

Send flowers to the Gerdts family.