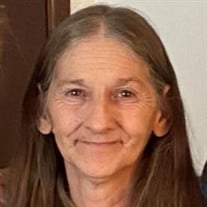 Donna Lorraine Clinton, 57-year-old resident of Siloam Springs, Arkansas, passed away on March 3, 2022, at Northwest Medical Center in Bentonville, Arkansas. She was born on October 14, 1964, in Litchfield, Illinois, to Donald Pierce and Dolores J. Calcott. Donna was a free spirit, and enjoyed being out on the river. She is preceded in death by her parents, Donald and Dolores; and her sisters, Lori Pierce and Peggy Bruffett. She is survived by her daughters, April Harrelson and Lori Davis; her sister, Karen DeMarco; her grandchildren, Shilah Hayes, Michael Davis, Jazzy Barnes, Lafe Barnes, Bronson Barnes, KK Barnes, Ethan Barnes and Haley Barnes; her nieces, Ashley and Haley Pierce, and numerous other nieces and nephews; and three great-grandchildren. No services are planned at this time.

The family of Donna Lorraine Clinton created this Life Tributes page to make it easy to share your memories.

Send flowers to the Clinton family.