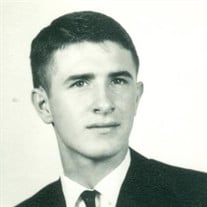 David Ross Griffin, 76 year old resident of Siloam Springs, Arkansas, died on March 16, 2020 at Washington Regional Medical Center in Fayetteville, Arkansas. He was born on June 1, 1943 in Siloam Springs, Arkansas, to Frank L. Griffin and Ithel Crittenden Griffin. David graduated from Westville High School in 1961. He married Phyllis Jones on June 6, 1964 in Westville, Oklahoma. David worked mostly for himself as a furniture maker, antiques dealer, and seller of everything. He also spent part of his life working at his mom’s dairy. David loved to tell stories of the past, about his life and his grandparent’s life. His mom was a school teacher around the country and he would go to school wherever she was teaching. David was a member of Lightning Ridge Church in Watts, Oklahoma, and his favorite verse was John 3:16. He was preceded in death by his parents and his grandparents. He is survived by his wife of 56 years, Phyllis Griffin; three children, Michael LeRoss Griffin and wife Gina of Highfill, Arkansas, Stephen Lewis Griffin of Siloam Springs, and Connie Lou Ann (Hall) Griffin of Kansas, Oklahoma; seven grandchildren, Brandy Cruse and husband Chris of Bentonville, Arkansas, Jessie Griffin of Siloam Springs, Christopher Griffin of Siloam Springs, Stephanie Avery and husband Ricky of Siloam Springs, Gracie Mae Hall of Kansas, Oklahoma, William Ross Hall of Kansas, and Cora Ann Hall of Kansas; and three great grandchildren, Noah Michael Cruse, Hudson Lynn Avery, and Hattie Dawn Avery. No services are planned at this time. The family will bury his ashes at Oak Hill Cemetery in Siloam Springs, at a later date.

The family of David Ross Griffin created this Life Tributes page to make it easy to share your memories.

Send flowers to the Griffin family.