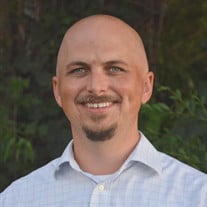 DAVE WAYNE BELLOMY, JR., of Siloam Springs, AR,finished the race and won the prize on September 21, 2021 in Springdale, AR. He was 42 years old. Born in Houston, Texas on July 23, 1979, Dave was the oldest of the two Bellomy boys. Arguably an “Aggie” from birth, he attended and graduated from Texas A&M University, where he would meet and fall in love with his wife of 19 years, Allison Bellomy. Together, they would build a life for their beautiful family of six in Siloam Springs, AR. Dave is survived by his wife, Allison Smith Bellomy of Siloam Springs, AR; four beautiful children, Jackson, Lauren, Peter, and Megan, all of the home; parents, David and Kathleen Bellomy of Livingston, TX; brother, Dwayne and his wife Christy Bellomy of Livingston, TX; and two nephews, Ethan Bellomy of Houston, TX and Tyler Bellomy of Livingston, TX. He was preceded in death by his grandparents, Wallace and Avis Bellomy; and grandparents, Bud and Edith Shivers. Those who had the privilege of knowing Dave surely knew the treasure he was. He was hilarious beyond comparison, never missing a moment to make others (and himself) laugh. And his laugh was nothing short of contagious. He was absolutely exuberant about life. His love for the Lord overflowed into a passion for people, and you could see that in everything he did. Dave was a member of Sager Creek Community Church for 15 years; a body of believers that has become like family to the Bellomy’s. He referred to himself as the “minister of announcements,” although the church insisted he was actually an elder. In addition to sharing the occasional Sunday morning message, Dave would be the first to share with others when they were in need. He truly exemplified servant leadership. From technology to terminology, Dave had a strong knowledge of the world around him. He was passionate about his work, but just as passionate about empowering others to do and be their best. He lived life to the fullest and the “fun-est,” but he was serious about the things that really mattered. Dave loved the Lord with all his heart, mind, soul, and strength, and strived to always be in “His will.” His wife Allison would gladly tell you that Jesus was his first love; a quality that drew her to him (and Jesus) more and more every day. He loved his wife and children like Christ loved the Church, and he invested all of himself in them. He was a gatherer of people and a light bearer for the Lord. He was anxious to listen, learn, and grow. He was an excellent teacher and a man of wisdom that far exceeded his age. One was better off for having known him . . . because if you really got to know Dave, you got to know the character of Christ a little better, too. Midst this great loss, we take comfort in six little words that have bridged the gap from earth to eternity for our friend, brother, husband, and father: “Well done, good and faithful servant.” (Matthew 25:23) Visitation will be from 6:00-8:00 P.M. at Sager Creek Community Church, Siloam Springs, on Friday, September 24th. A private family burial will take place later at Oak Hill Cemetery, Siloam Springs AR. In honor of Dave’s heart for missions, we ask that memorial gifts be designated for the Sager Creek Community Church Missions fund, where it will be used to further the saving message of Christ for the World.

DAVE WAYNE BELLOMY, JR., of Siloam Springs, AR,finished the race and won the prize on September 21, 2021 in Springdale, AR. He was 42 years old. Born in Houston, Texas on July 23, 1979, Dave was the oldest of the two Bellomy boys. Arguably... View Obituary & Service Information

The family of David "Dave" Wayne Bellomy created this Life Tributes page to make it easy to share your memories.

Send flowers to the Bellomy family.