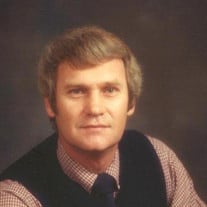 David Ray Barnett, 77, died at home in Siloam Springs, Arkansas, on April 12, 2020. The eldest of seven children, he was passionately loved by his family and friends. David was preceded in death by his father, Ray Barnett, and brother, Robert Barnett. He is survived by his mother, Laurine Barnett, of the home; sister Jane Johnson (husband, Jerry) of Waco, Texas; sister-in- law, Margaret Barnett, of New Jersey; sister Mary Boxx (husband, Randy), brothers Jonathan Barnett (wife, Christy) and James Barnett (wife, Marilyn), all of Siloam Springs; and brother Mark Barnett (wife, Sandra) of Lawrence, Kansas. He is also survived by many aunts, nephews, nieces, cousins, and a god- grandson, David (Little Dave) Nicholas. He was born on December 15, 1942, at the old hospital in downtown Siloam Springs, to Ray and Laurine Barnett. When David was a freshman in high school his family moved to Gentry where he graduated in 1960. His classmates elected him their senior class president. By age 14, David was working for his uncle, Ervie Barnett, at Barnett’s Dairyette in Siloam Springs, and bought his first motorcycle (a rare commodity back then) to get back and forth to work. A year later he purchased his first car, being one of only two high school students to own an automobile. After attending the University of Arkansas for one semester, he joined the Air Force, serving in San Antonio, Amarillo, Del Rio (Texas), Turkey, and Taiwan. His job was base finance and inventory management specialist - ordering, supplying and keeping records of parts for various planes flying into his base. After the Air Force, he worked several years as a clerk for the Chesapeake & Ohio Railroad in Toledo, Ohio. Later on he trained motel managers all over the country before securing a job as a technician servicing oil rigs in Texas and Oklahoma. In 1996 he opened up Dave’s Appliance in downtown Siloam Springs and sold used appliances and furniture out of the old Feemster’s Chevrolet building. He later purchased the Smith Furniture building across the street and started selling new furniture there under the name of Downtown Discount Furniture. After his health started to decline a few years ago, he sold both businesses and buildings but continued to work as an appliance repairman - the job he loved most. David will be remembered as being very thoughtful, generous, friendly, good-natured, and full of humor. He thoroughly enjoyed brightening everyone’s day by telling jokes and making them smile. David also had a soft heart and intensely cared for all of his family, especially his parents. He is the second of seven siblings to pass away within the past 10 months. Our family has lost another ray of sunshine, but he will continue to be in our thoughts every time we hear a joke or something that makes us laugh. A memorial service will be scheduled at some time in the future.

David Ray Barnett, 77, died at home in Siloam Springs, Arkansas, on April 12, 2020. The eldest of seven children, he was passionately loved by his family and friends. David was preceded in death by his father, Ray Barnett, and brother, Robert... View Obituary & Service Information

The family of David Ray Barnett created this Life Tributes page to make it easy to share your memories.

Send flowers to the Barnett family.