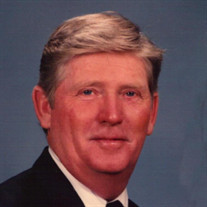 Charles Otto Jones Jr, 79, of Siloam Springs, Arkansas died February 10, 2021 in his home. He was born July 22, 1941 in Lebanon, Missouri to Charles and Agnes (Clayton) Jones, Sr. Charles graduated from Marshfield High School in Missouri and moved to Los Angeles, California where he joined the US Air Force in 1961. He served till 1967 as an aircraft mechanic. Charles married Rosa Ward on June 15, 1963 in Roswell, New Mexico and they moved to Amarillo, Texas in 1970 where he worked at Bell Helicopter. In 1973 they moved to White Deer, Texas to farm and raise their boys. They later moved to Moreno Valley, California and then to Gentry, Arkansas in 1997 where he started RJ Tractor and Equipment Rental. Eventually, they settled in Siloam Springs where he lived out his days on the farm, raising cattle and his horse, Lady Bug. Charles was a member of Gentry First Baptist Church and the Lion’s Club. He was preceded in death by his parents, brothers Steven “Nick” and Larry Jones, and sisters Bonnie Viertel, Billie Swenson and Ruby Jones. Survivors include his wife Rosa of the home; sons Chuck Jones and wife Sharon of Siloam Springs, Arkansas, Tim Jones of Siloam Springs, and Steve Jones and wife Jodi of Gentry, Arkansas; five grandchildren Brook, Tristen, Charlie, Zach and Aidan Jones; one great granddaughter, Novah’Rae; and several nieces and nephews. Funeral services will be 10:00 a.m., Saturday, February 13, 2021 at First Baptist Church, Gentry, Arkansas. Visitation will be 5:30 p.m. to 7:30 p.m., Friday, February 12, 2021 at Wasson Funeral Home, Siloam Springs, Arkansas. Burial will be at the Fayetteville National Cemetery, Fayetteville, Arkansas. For the visitation and funeral service, guests will be required to wear their own facemask and social distance per the guidelines set forth by the State of Arkansas.

The family of Charles Otto Jones Jr created this Life Tributes page to make it easy to share your memories.

Send flowers to the Jones family.