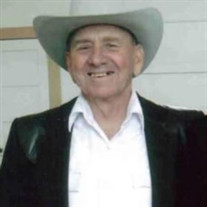 Charles Ben Chamberlain, 88 year old resident of Colcord, Oklahoma, died on May 7, 2020 at Quail Ridge Living Center in West Siloam Springs, Oklahoma. He was born on January 25, 1932 in Colcord to Clyde Chamberlain and Alma Bond Chamberlain. Charles graduated from Colcord High School. He enlisted in the United States Army during the Korean War. Charles married Wynona Martin on May 25, 1956 in Westville, Oklahoma. He worked as a dairy farmer most of his life. Charles liked to buy old properties and clean them up to sell them. Charles was a member of the Colcord Riding Club and he was of the Baptist faith. He was preceded in death by his wife, Wynona; son, Rusty Chamberlain; sister, Bertadean Eager; and parents, Clyde and Alma Chamberlain. He is survived by three daughters, Debbie Hegar and husband Albert, Jerri Mitchell and husband Keith, and Rhonda Reed and husband Joey, all of Colcord; six grandchildren, Charles McCratic, Tashina Kirk, Lance McCratic, Caleb Reed, Shanda Barnett, and Cory Reed; six great grandsons; seven great granddaughters; four brothers, Lindy Chamberlain, James Chamberlain, Vernie Chamberlain, and Mike Chamberlain; five sisters, Geraldine Tisdale, Shirley Harper, Rosalee Layne, Leola Curtis, and Rita Swicegood; sister-in-law, Wyvonne Kinzey; and a slew of nieces and nephews. The family will have a private graveside service at Dickson Cemetery in Cherokee City, Arkansas. Charles will be available for viewing from 12:00 p.m. to 8:00 p.m., Friday, May 8, 2020 at Wasson Funeral Home in Siloam Springs, Arkansas, with no more than 10 people being allowed in at a time, due to current social distancing restrictions.

The family of Charles Ben Chamberlain created this Life Tributes page to make it easy to share your memories.

Send flowers to the Chamberlain family.