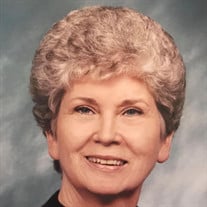 Carrie Marie Neal Thompson, 77, of Decatur, Ark., died Friday, July 10, 2020 at her home. She was born on June 21, 1943, in Bennett, Mo., to Charles Edgar Neal and Dorina Mabel (Coursey) Neal. Her family moved from southeast Missouri to Colorado, Michigan and Tulsa, Okla. She graduated from Ozark Adventist Academy in Gentry, Ark., in 1961. She went on to attend Union College in Lincoln, Neb, where she met her husband Fred Thompson. They were married on Aug. 11, 1963. The couple moved to Loma Linda, Calif., so Fred could attend Loma Linda University. After he graduated with a degree in physical therapy, they moved to South Carolina for several years so he could take a job as a clinic director then moved to Decatur in 1976 so he could take a job at the Gravette Medical Center Hospital in Gravette, Ark. While living in Northwest Arkansas, she attended John Brown University in Siloam Springs, Ark. She was a long-time member of the Gentry Seventh-day Adventist Church in Gentry, Ark. She served for many years on the church board and as chairman of the Total Life Community Center board. She also worked for several years as an executive assistant at the KSBN Television Station in Springdale, Ark. She enjoyed reading, art, music and had many creative and artistic talents. She also enjoyed travel, nature and spending time outdoors, and especially spending time with her family and grandchildren. She is preceded in death by her parents; an infant sister, Charla Rue Neal; and a brother, Alfred Neal. She is survived by her husband of 57 years; a daughter, Janelle Jessen and husband James of Decatur; three grandchildren, Emily, Isaac and Adriana Jessen; a brother, Charles “Chuck” Neal and wife Connie of Butte Valley, Calif.; and a sister-in-law, Helen Rogers and husband Bobby of Siloam Springs; along with many nieces and nephews, family members and friends. Visitation will be from 6:30 to 8 p.m. Tuesday, July 14, 2020. Funeral Services will take place at 10 a.m. Wednesday, July 15, 2020 at the Gentry Seventh-day Adventist Church. Burial will follow at the Tahlequah City Cemetery in Tahlequah, Okla. For the funeral service and visitation, guests will be limited to 250 people and everyone will be required to wear their own facemask, per the guidelines set forth by the State of Arkansas.

The family of Carrie Marie Thompson created this Life Tributes page to make it easy to share your memories.

Send flowers to the Thompson family.