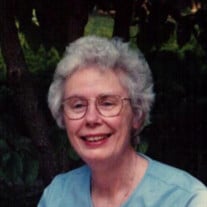 Barbara Ann Stinnett, MD passed away April 22, 2021 at Willard Walker Hospice in Fayetteville, Arkansas. A resident of Siloam Springs, she was the daughter of O.A. and Thelma Brown and had one older brother, Jim (now deceased). Barbara was born August 17th, 1933 and grew up in Fort Smith, Arkansas. She graduated at the top of her class at Fort Smith High School and enrolled at the University of Arkansas as had her mother and grandmother before her. She was admitted to the University of Arkansas College of Medicine in February 1955 during her senior year and was among the first in her class to receive her medical school acceptance letter. Barbara met Charles at a dinner for incoming medical school freshmen at Mary Maestri's. The two married in 1956 at Barbara’s parents’ farmhouse in Bloomer, Arkansas (near Charleston). After graduating from medical school in 1959, their first son, Scott, was born later that year. After residency, they moved to Siloam Springs, Arkansas. Barbara and Charles second son, Steve, was born in 1961. Barbara was active in her community and was a member of PEO and First United Methodist Church. She served on the Siloam Springs School Board and was asked by Governor Dale Bumpers to coordinate an immunization program for school children in Northwest Arkansas. She is survived by sons Scott (Kelley) & Steve (Cindy), and her grandchildren, Benjamin, Elizabeth, Corbin, Bailey, Matt, and Jordan. She encouraged and supported her children and grandchildren in their many endeavors. She always saw the positive side of everyone. In later years, Barbara immensely enjoyed traveling, Barbara and Charles traveled to 49 states. She enjoyed visiting her grandkids, working puzzles, and taking care of everyone else. In lieu of Flowers, donations to the Siloam Springs High School Scholarship Fund are greatly appreciated.

Barbara Ann Stinnett, MD passed away April 22, 2021 at Willard Walker Hospice in Fayetteville, Arkansas. A resident of Siloam Springs, she was the daughter of O.A. and Thelma Brown and had one older brother, Jim (now deceased). Barbara was... View Obituary & Service Information

The family of Barbara Ann Stinnett created this Life Tributes page to make it easy to share your memories.

Send flowers to the Stinnett family.