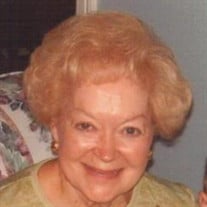 Barbara Dellinger Atkinson Foreman of Siloam Springs, AR, passed peacefully from this earth on July 13, 2020, at Siloam Springs Nursing and Rehab. Born October 26, 1931, in Siloam Springs, AR, to Goldie Norton Dellinger Hardcastle and Luther Sherman Dellinger, she grew up in the Springtown Community, and later graduated Gentry schools as co-Valedictorian. She later moved to Wichita, KS, where she earned her AA in Business/ Bookkeeping. While singing in a church choir there, Barbara met Ken Atkinson. They were married and later had two children, Marc David and Greg Doran. Ken, an engineer, worked in the aerospace industry which took them to Slidell, LA, and later to Arlington, TX. Barbara worked as an Executive Assistant and Office Manager for various companies, retiring from Tappan/Electrolux. She then reacquainted with a high school alum, Charles Foreman, while at a multi-class reunion in Gentry. Barbara moved back to Siloam Springs and shortly after, they married. Barbara was an avid reader who loved history, biographies and local and national politics. She often wrote letters to the editor of the area newspapers, and was a staunch member of the Siloam Springs Republican Women’s organization. She also volunteered for several years at the Choices Pregnancy Services Center. Barbara was preceded in death by her father, mother, step father, RC Hardcastle, step mother, Naomi Cash Dellinger, her husbands, Ken and Charles, and a brother, R. Lynn Dellinger. She is survived by her two sons, Marc David and Greg Doran (Sharon) Atkinson, two brothers- G. Ronald Dellinger (Linda), A. Terry Dellinger (Sandy), step sister, Nancy Hardcastle Stanfill, grandsons, Kenneth Gene and Scott Thomas Atkinson, three step children, Charles Foreman, Jr., Celia Foreman Weeks (Bruce), Karisha Foreman Starnes (Wade), as well as many other loving family members. There will be a viewing at Wasson Funeral Home, 441 US-412, Siloam Springs, AR 72761, on Friday 6:00- 7:30 PM (Masks Required). A service will be held at Covenant Church 760 S Lincoln St, Siloam Springs, AR 72761, at 10:00 AM Sat., July 18, for family, friends and church family (Masks Required). Contact the church for reservation. Due to COVID-19 guidelines, seating is limited and masks are required. A car parade celebration will be held at 10:40 in the parking lot of the church for those who cannot or do not feel comfortable to attend the service. The family will have a receiving line outside as well-wishers pass by to offer condolences. Our sincere thanks to all of the nurses and staff at the Siloam Springs Nursing and Rehab Center, as well as, to the angels from Circle of Life Hospice for their sincere, caring ministrations to Barbara during this unusual and difficult time. In lieu of flowers, the family requests that memorials be made in Barbara’s honor to Choices Pregnancy Services, 809 S. Mt. Olive, Siloam Springs, AR 72761, or Circle of Life Hospice, 1201 NE Legacy Parkway, Bentonville, AR 72712. Condolences can be expressed at Wasson Funeral Home website.

The family of Barbara Foreman created this Life Tributes page to make it easy to share your memories.

Send flowers to the Foreman family.