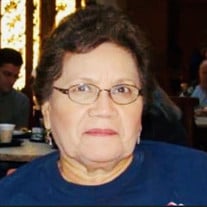 Annie Marie O’Fields Lamb 84, of Rocky Ford, Oklahoma Annie gained her wings on December 25, 2020 in her Rocky Ford home surrounded by her loving daughters, admired son’s in law, revered grandchildren, and precious greatgrandchildren. Annie’s sparkling deep brown eyes opened on February 24, 1936, welcomed by her two loving parents, Joe W. O’Fields and Ollie Moccasin O’Fields, both full blood Cherokee Original Enrollees of the Dawes Commission. She was greeted by her big brother “Sonny” Samuel Weeks O’Fields, and later followed by her baby sister “Bit” Mary Ellen O’Fields. At the age of four, Annie lost her sweet mother, at which time she and her siblings entered the Sequoyah Orphan Training School. She lived there until her Freshman year when she moved home, transferred to, and graduated from Kansas High School. She graduated with the aspirations and goals of becoming a Registered Nurse. She made family her first priority and put those dreams on hold, to raise six exceptional children. On November 30, 1973 she graduated as an LPN and worked for 4 years in labor and delivery at Siloam Springs Memorial Hospital. After assisting in the delivery of hundreds of babies, Annie, sat her husband and children down, and informed them that she was going to enroll in the Bacone college of nursing to pursue her lifelong dream of becoming an RN. She said, “If I am going to do an RN’s work, I am going to get an RN’s pay”. Three years later, she graduated with an Associate degree in Nursing, becoming a Registered Nurse in May 1980. Upon graduation, Annie was excited to begin her career as a registered nurse, and was proud to serve her tribe, the Cherokee Nation, by working at WW Hastings Indian Hospital for 20 years. During that time Northeastern State University announced that they would offer a bachelor’s degree in Nursing, and with the desire to become the best nurse she could be, she enrolled in their inaugural class. Annie worked full time, attended school full time, and was a graduate of NSU’s first graduating class in their BSN program. She served as the class president of that initial class and graduated with honors. Annie dedicated 20 years of her life to Indian Health Service before retiring to golf and spend time with her family. After losing her husband of 50 years, she went back to work as a school nurse for Watts Public Schools. That retirement was short lived as she felt she still wanted to serve the people of Cherokee county, so she returned to work as a hospice nurse for Carter Home Health. She worked there for several years before trying her hand at retirement again in 2012 but wasn’t retired long before she was persuaded to become a part time teacher in the nursing education program at the Northeast Technology Center in Kansas, OK and the Indian Capital Technology Center in Tahlequah. Annie was preceded in death by her parents Joe and Ollie, her husband Enoch George Lamb, her precious son’s Dennis Eugene Lamb and Ronald James Lamb, her brother Sonny and sister Bit. Annie is survived by her four adoring daughters Barbara Ann Tucker, her husband David Tucker of Rocky Ford, Anita Jean Odle, her husband Steve Odle of Twin Oaks, Gina Kay Stanley of Tulsa, Susan Gail Reed, her husband Brent Reed of Kansas, OK, 13 grandchildren, Lanae Tucker, Lindsey Tucker, Andi Tucker, Ryan Odle, Kayce Grigg, Kayla Shortt, Jennifer Tehee, Lauren Lamb, Dennis George Lamb, Derrick Stanley, Nathan Stanley, Alexandria Smart, and Isaiah Reed, 18 great grandchildren, D’Anthony Tucker, Aydin Tucker, Joshua Tucker, Jacob Atterberry, Caleb Tehee, Bailey Tehee, Emalyn Lamb, Easton Lamb, Laynee Stanley, Colt Stanley, Kinley Odle, Kassidy Odle, Connor Odle, Travis Grigg, J.T. Shortt, Jolee Shortt, Elisha Smart, and Sophia Smart. Annie was an exceptional woman, mother, wife, daughter, nurse, and athlete. She was a boarding school survivor; she was born into poverty raised without the sweet hugs and kisses of a mother but was considered by her children as a phenomenal mother. Being the epitome of a Proverbs 31 woman, she overcame every single obstacle that she faced, with grace, dignity, and perseverance. The Annie Lamb family would like to express their sincere and heartfelt thanks to Dr. Owen Buck Gilmore, Dr. Dorian Turner, Dr. Jim Lewis, the medical surgical staff of W.W. Hastings Hospital, Deborah Proctor, Katie Blair, Melanie Stopp, Friends, Family, the Galilean Church Family, and her work family. If attending the services, the family asks that you eschew the traditional black dress code in favor of something blue and colorful in honor of Annie, her favorite color was blue. Masks will be required, and we will be practicing social distancing. Funeral services will be 2:00 p.m., Wednesday, December 30, 2020 at Kansas School Event Center in Kansas, Oklahoma. Visitation will be from 6:00 p.m. to 8:00 p.m., Tuesday, December 29, 2020 at Wasson Funeral Home in Siloam Springs. For the visitation guests will be limited to 150 people, per the guidelines set forth by the State of Arkansas.

The family of Annie Marie Lamb created this Life Tributes page to make it easy to share your memories.

Send flowers to the Lamb family.