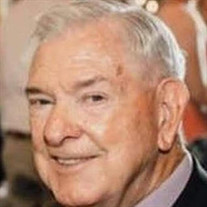 Aldon (Al) Waggoner, 86, of Siloam Springs went to be with his Lord and Savior on November 5, 2020 at Circle of Life in Springdale. He was born August 27, 1934 in Isabella Oklahoma. Al was a wonderful loving husband, father, grandfather, great grandfather, friend and man. His faith and his family were most important to him. He was a member of the First United Methodist Church. Prior to joining the Methodist church he was extremely active for many years in the Baptist Church. He loved walking the neighborhood and praying with/for people. He enjoyed time with his family, supporting his grandchildren in all kinds of activities, playing golf with his best friend Tom, working in his yard and walks/cart rides with his little buddies Sal and Rudi. Al grew up in Mansfield, Arkansas and attended Fort Smith Junior College. He received a degree in accounting from the International Accountants Society school in Chicago. In March of 2001 he retired from Allen Canning Company in Siloam Springs, Arkanss as Vice President of Distribution. Prior to his 30 years with Allens, he worked for Union Pacific Railroad in Portland, Oregon; was Van Buren District Manager for the Fort Smith Gas Company for 9 years; worked for Campbell 66 Express and Roadway Express in Tulsa, Oklahoma; and was Traffic Manager for HLH Products in Van Buren. He was preceded in death by his wife, Edna Marie Jacobs, who he married on December 31, 1958; his parents, Audra H. and Edith M. (Ethridge) Waggoner; his sisters, Pearl Pendergraft and Marie Haas; brothers, Joe, Eugene and Eldon (his twin) Waggoner; and his special buddies Rudi and Sal. He is survived by his wife of 32 years, Jane Bryan Gattis Waggoner; son, David Waggoner and wife Linda of Plano, Texas and son, Mike Waggoner and wife Candy of Rogers, Arkansas; daughter, Melanie Wade and husband Todd of Siloam Springs, Arkansas; stepson, Sean Gattis and wife Sherry of Sugarland, Texas; stepdaughter, Nicole Ross and husband Stanton of Bentonville, Arkansas; 6 grandchildren, Wendy Murillo and husband Oscar of Bella Vista, Arkansas, Jessica Merrill and husband Zach of Siloam Springs, Arkansas, Casey Harmon and husband Travis of Austin, Texas, Allie Wade of North Little Rock, Arkansas, J. D. Waggoner of Dallas, Texas and Marisa Edwards and husband Jonathan of Atlanta, Georgia.; 5 great grandchildren, Aden, Audie and Austen Murillo, Grayson Wade and Charlotte Merrill; 3 brothers, Lester and wife Mary, Kenneth and wife Holly and Wayne and wife Gail Waggoner. Services are private. In lieu of flowers donations are requested to be made to the For Their Future Campaign, First United Methodist Church, Siloam Springs or to any animal shelter or rescue organization,

Aldon (Al) Waggoner, 86, of Siloam Springs went to be with his Lord and Savior on November 5, 2020 at Circle of Life in Springdale. He was born August 27, 1934 in Isabella Oklahoma. Al was a wonderful loving husband, father, grandfather, great... View Obituary & Service Information

The family of Aldon "Al" L. Waggoner created this Life Tributes page to make it easy to share your memories.

Send flowers to the Waggoner family.